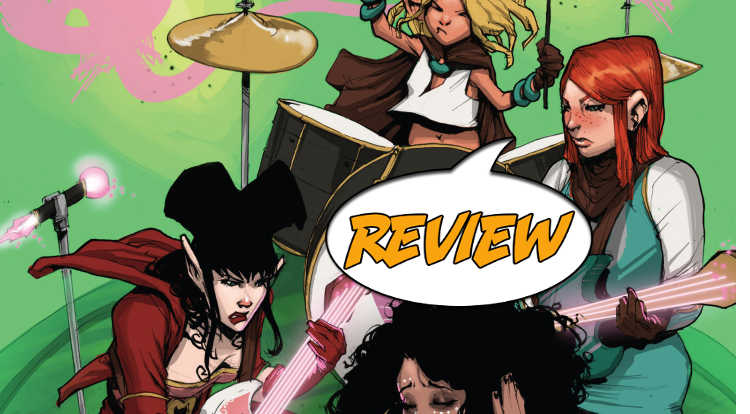 The Rat Queens face the mother of all hangovers, mushroom people, each other’s rage and the reintroduction to Old Lady Bernadette. EVERYTHING GOES TO HELL

… and if you’ve been keeping up with Rat Queens to this point this should key you into the level of drama and revelations that unfold in the sixth issue.

Writer Kurtis J. Wiebe is back in full swing as Dee, Violet, Betty and Hannah awaken following their massively-massive party. Everyone except Dee has had someone in her bed, but only Hannah forces Sawyer to leave under an invisibility spell; probably because Sawyer is an ex-boyfriend who keeps getting Hannah arrested. For the remainder of Rat Queens #6 Hannah the elf prickles at any and everybody (but mostly Dee), who mentions the fact that she has trysted with her former lover and captain of the city guard.

Side note: it was really nice to see Betty and Faeyri together as payoff following a specific scene in a previous issue. They’re currently one of my favourite potential-couple-cum-couple in comic books.

Sawyer, for his part, tracks down the assassin who had previously captured Old Lady Bernadette (I’m going to keep the identity unspoiled even though it was revealed in issue 5), and saves the former villainess of the series. Saves might be a generous verb choice on my behalf, when in the final pages of Rat Queens #6 it is revealed to the reader exactly what has happened to Old Lady Bernadette … and that is fairly brutal.

Backing up to the Rat Queens proper: they are summoned before the mayor of Palisades with the expectation of being remanded. However, they are rewarded for removing the member of a large public statue and sent out on a quest. The quest mostly involves murdering mushroom people whilst Dee and Violet snipe at each other over the Hannah/Sawyer relationship and Betty ingests fallen bits and pieces of their foes because of science. Which is to say: mostly to determine if the mushroom people posses psychedelic qualities.

Wiebe goes on to use Rat Queens #6 for two big reveals that I won’t spoil in this review although they are certain to alter the shape of the narrative from this point forward. I will put this out into the ether, however: there is a death and there is the revelation of a husband.

… I leave you to your deductions.

Hannah, Dee, Betty and Violet continue their adventures through the high fantasy world of Palisades with their contemporary oft-crass dialogue and Rat Queens #6 wraps up into the same awesome package readers have come to expect of Wiebe up to this point.

Rat Queens #6 looks outstanding. Every other issue of Rat Queens has looked outstanding. It stands as a testament to Roc Upchurch’s quality as not only an artist, but a colourist, and makes me wish, wish, wish that he gets his hands on a superhero I’ve affection for.

It bears noting that Rat Queens (whether this decision lies with Upchurch or Wiebe, I’m not quite certain), is a female-driven comic with women of every shape, size, ethnicity and race represented … in the sense of both the world the readers live in and the high-fantasy realm the characters reside within. In Rat Queens #6, for example, there is a new female member of the city guard introduced and she is a person of colour.

There are notes to be taken from Rat Queens and Upchurch about not only including female characters, but drawing them like real people. So, if it’s not obvious, for my money, there is nothing else I could want from the art of this issue (and the series as a whole).

Rat Queens #6 comes to stands with the pedigree of all five issues that came before and it is nothing short of well deserved. There are so many things here to like and it not only behooves you to read this issue, but, for continuity’s sake, everything that came before. Get yourself into the Rat Queens mythology. You’ll thank me for me.