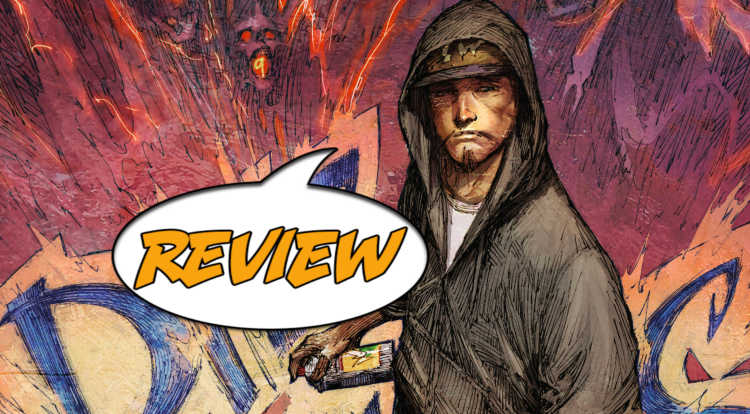 Rise of the Magi #0 Review

Asa fixes magic carpets for a living and calls his friends on a cellphone disguising itself as a walnut, yet he longs for so much more than that! CHARMING AS ALL GET OUT

Before getting into the rest of my review I just want to stat, for the record, that Rise of the Magi #0 is probably my favourite thing to have been published for Free Comic Book Day 2014.

The issue opens with the explanation that there is, in fact, magic in this world – however – there is a finite amount of it. All the magic in the world is contained within a black orb. Said orb was stolen by persons unknown and, doubtless, we are about to witness severe ramifications.

Despite the very serious tone of the opening page Marc Silvestri pens Rise of the Magi #0 with a pretty light tone that occasionally gets a bit too expositional. I am willing to let that slide because this is a 0 issue and we’re getting a lot of the ground rules out of the way before the characters/story can really play in issue 1. The story proper opens on Asa, teenaged son of a magic carpet repairman. His father insists that he has a gift, that he was born to this craft from a long line of artisans and not to bother looking elsewhere for fulfillment. There’s a particularly nice tongue-in-cheek moment where Asa’s father throws away his comic book.

Asa, on the other hand, wants to do something significant. For him that means being a soldier in the Spell Guard like his older brother Raye. Stop me if you heard it before, but watching the fledgling magi steal a flying carpet, cruise to Crystal City, procure a magic (lick-able), frog from his best friend and uncover a dark truth about his brother and the Spell Guard took the trope and flipped it on its head enough for me to stick around.

In eleven pages Silvestri has managed to lay out one of the sweetest and most charming characters and worlds that I’ve ever seen come out of Top Cow. I was certainly left wondering about the specifics of the titular MAGI yet that is hardly a deal breaker with the rest of the issue being as fun as it is. There is no doubt in my mind that Rise of the Magi #0 (and likely the rest of the series), is something the writer is having as much enjoyment with as the readers will.

As I mentioned the dialogue (most particularly from Asa’s father), gets a touch stunted and expositional at times, but if Silvestri keeps world-building at this pace and manages to avoid falling into similar traps then Rise of the Magi has the potential to turn into something very, very special.

I do want to gripe on letterer Troy Peteri for a second because he has chosen the tiniest, borderline illegible font to letter Rise of the Magi #0 with and I’m begging Top Cow to make a different choice for the rest of the run! Please!

The cover of Rise of the Magi #0, drawn by Marc Silvestri, is cool. It’s an interesting image, well-coloured by Andy Troy … that has no payoff inside the pages. Like the title, it is probably something that will make sense in the long run and, as dynamic as it is, I can’t help wishing that the issue had started with a different jacket.

Sumeyye Kesgin – responsible for all the art between the jackets – draws very kinetic panels without having them feel over-packed. The Istanbul-based artist brings a distinctly exotic style to this fantasy world that realizes Silvestri’s vision while he was busy teaching us the ground rules. This is her first comics offering and I look forward to seeing much, much more work. Everything she puts on paper from Asa to Crystal City lived up to my mental image without falling into the realm of the expected.

There is also a frog character in Rise of the Magi #0 that I can’t wait to see Kesgin do more with!

Beautiful art is a staple and an expectation from Top Cow comic books and one of things that has set it apart from other publishers in the past and I honestly believe that Kesgin’s work on Rise of the Magi #0 (and presumably the other art she will reveal in coming issues), is a realization of this.

Rise of the Magi #0 is sweet, sweet, sweet and fun, fun, fun! The issue is free! At that price, even the little things I’ve griped about get a pass. The eleven pages are a treat and a promise of exciting things to come.