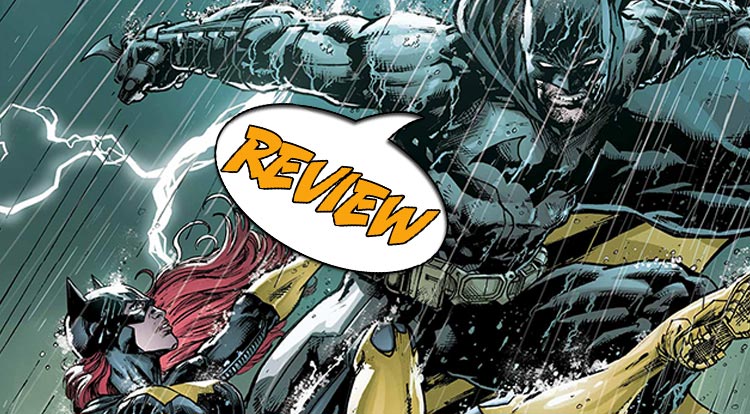 Batgirl fights with Batman on how to deal the incarceration of James Gordon as Batman Eternal enters its fourth week.

Previously in Batman Eternal: James Gordon has been arrested, and Stephanie Brown is on the run from her father. With Carmine Falcone back in town, what is the Batman going to do?

The main plot of the issue is the conflict between Batman and Batgirl. Batgirl gets very frustrated with the way Batman is treating her father’s case. Which makes little sense since we all know that Batman would move heaven and earth to do anything for James Gordon. So Batgirl decides to take our her anxiety the only way she knows how. By beating thugs up in an alley, vigilante style! While this is meant to make the reader empathetic to Barbara’s situation, it makes the readers feel less sympathetic to her. Casual violence doesn’t reduce stress, Batgirl!

Another focus in this issue is the fine police officers of the GCPD. While Jason Bard has been brought in to be our hero protagonist in the case of Jim Gordon, Major Forbes is our antagonist. He’s also the most one dimensional character I’ve read in a Batman comic in a long time. By making him the mouthpiece of the “Batman is a criminal” storyline, it becomes almost groan inducing everytime he has a piece of dialogue. We know he’s a crooked cop. We know he hates Batman. We just don’t need to be reminded of said fact in every word balloon.

The one true revelation and best scene in the book involves Stephanie Brown. She’s on the run from her criminal dad. So Stephanie turns to the only person she can trust. The twist the writers put on this scene literally made me yell out loud. It was completely unexpected and enjoyable. In an issue filled with cliches and tired plotting, sometimes a simple turn of character is all you need.

A superb highlight of this issue is the art. Not only has Dustin Nguyen been one of the premiere Batman artists of the last five years, and putting him as the artist of Batman Eternal seems like a perfect fit. The colorist also provides excellent work by making sure that all of Nguyen’s art pops and excites at the precise moments. Gotham has never looked so dark and dare I say it, fun.

THE BOTTOM LINE: ETERNAL FOR YOU, BUT NOT FOR ME

When Batman Eternal launched, I decided to give it four issues before decided to stay with it for the whole year. After this issue, I have decided to drop the title. The idea is strong, but the payoff from week to week is minimal. By having characters fill cliched stereotypes to propel the story along, I soon fear that Batman Eternal will run out of gas. Or perhaps it will read better in trade. If you’re a huge Batman fan, then this could be the perfect book for you. For the casual DC fan, stay away from Gotham.