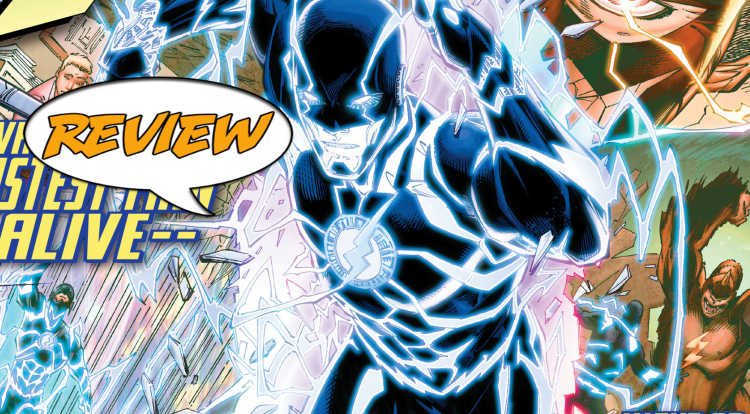 In the third Flash annual of the New 52 we get a lot of talking, a costume change for Barry and a not-so-politically correct introduction to fan-favourite speedster Wally West. The first 18 pages of The Flash Annual #3 are all talking with a brief flash-forward to a time that is not quite in line with the Future’s End plotline DC is currently publishing. From this detail alone it is clear that the team of Van Jensen and Robert Venditti (the writer who undid so much of what was good about the Green Lantern title), have no idea what they are doing.

This issue has been toted for some time as being the Introduction of Wally West into the New 52! Regardless of one’s opinions regarding the change in ethnicity they’ve decided to make Wally African-American. Cool! Great! Where I ran into a problem was this: the African-American Wally West is discovered by the white detective Barry Allen committing a petty crime (spray-painting), and spend the next few pages of the Flash Annual #3 being held IN JAIL and waiting to be bailed out by his aunt. First off: are teenaged boys with no previous offenses thrown in jail for spray painting a wall? Second off: could we not introduce one of DC’s only characters of colour by having them engaged in criminal activity (no matter how childish it may be)?

The rest of the annual is largely downhill from there. The Flash Annual #3 cuts back and forth between present day Barry foiling some art thieves in a poorly-executed throwback to the days of DC’s past and ambiguous future Barry standing over Wally’s grave. He meets Iris West in both timelines, although she is somewhat changed in the future storyline (but I won’t spoil that in case you’ve yet to read it).

When not drowning in his own guilt over Wally’s death through the pages of the Flash Annual #3 Barry faces off against Gorilla Grodd … and that’s about as interesting as it sounds. The capper (again, I won’t spoil it), to this particular storyline goes so against everything I’ve ever known Barry Allen to be that some 40-odd pages lady are hardly worth skimming through as one could surmise about the rest of Jensen and Venditti’s run on the title.

It’s not even that the story they’ve put on the page is bad, it’s “meh” level at the worst – it is the misinterpretation of two beloved DC characters that leaves absolutely nothing to be desired about the Flash Annual #3.

Two artists, like two writers. The four creators of the Flash Annual #3 certainly prove the adage of “too many cooks in the kitchen”. Brett Booth’s pages are well done (if you can get over his recent internet insults), and Ron Frenz’s pages are disproportionate.

Barry (who appears in more panels than any other character in the entire issue), rarely looks the same from one page to another and is often forced into absurd poses. His wrists, for example, are nothing short of hyper mobile. Beyond the lackluster cameo of Wally West the remaining cast of the Flash Annual #3 are forgettable. They are all of a similar stock, though they are garbed in different outfits.

Beyond that there is nothing much worth mentioned about Booth and Frenz’s work on this issue. This is an annual and I cannot help but feel that it ought to have been something spectacular.

If you have even a passing care for any of the characters in the Flash mythology the Flash Annual #3 will probably upset you. It’s full of names and (sometimes), faces we know so twisted that the recognition feels false. Everything else about the issue is so shoddily thrown together, and with such a lack of reverence for the material, that $4.99 is a ludicrous asking price.