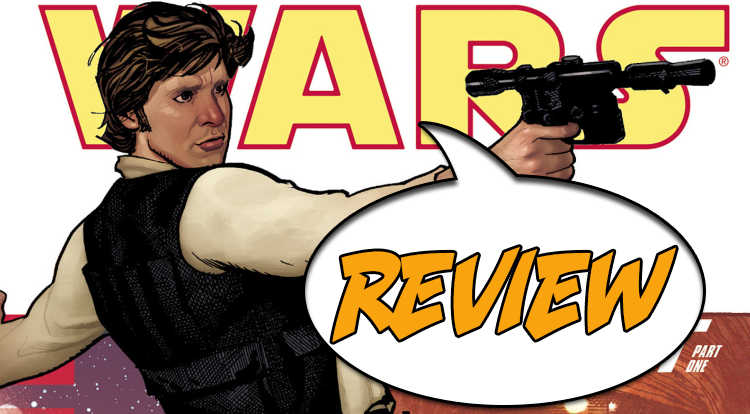 A new rebel recruit goes to Correlia to meet his mentor, the person who will fold him into the resistance. Guide him through this war. Instead he gets Han Solo and, legend or not, it’s all downhill from there.

“The events in this story take place sometime before the events of Star Wars: Episode V – The Empire Strikes Back.” so reads the inside cover of Matt Kindt’s Star Wars: Rebel Heist #1 and unless the reader is a very well educated Star Wars fan that’s really all you need to know in order to jump right into this comic.

The issue begins with the introduction of a (nameless – why are they always nameless?), narrator. His internal monologues make up most of the words throughout Star Wars: Rebel Heist #1 as we follow him from Correlia to … a much worse place than that.

Here’s the thing you need to know about Correlia: it’s where Han Solo was born. This is a nice bit of foreshadowing for more-than-casual fans of the Star Wars universe.

Now, Han Solo is my favourite character in Star Wars (as with so many other people), and it definitely makes sense to begin this miniseries with him. However, Kindt writes our unnamed protagonist as so enthralled with Solo that it reads almost as a love letter than an adventure tale. The pair meet in a bar fight – Han shoots first and nobody was surprised ever – lead the authorities on a high speed chase through the city on a stolen speeder only to attempt further escape on a stolen shuttle and wind up captured and taken prisoner aboard an Imperial Space Station. All this in less than 20 pages!

It’s an exciting romp, no doubt, but when Han and our protagonist settle into their life as prisoners Kindt drops the slavish fanboy tone and the framing device of the entire issue is revealed. I’m not going to spoiler it for you because it’s quite interesting. I further appreciated the reveal because when the action drops out of Star Wars: Rebel Heist #1 the issue gets really, really … well … boring, honestly and it is not until the final two pages that the reader can appreciate this shift in tone.

The kinetic quality Kindt writes into Star Wars: Rebel Heist #1 is a lot of fun and works for a Han Solo issue. The overly devoted narrative gets a little tired – he describes Solo’s hand in such detail that is reminiscent of a fanficton I read in my teenaged years. Despite the fun action, I wonder if Kindt will be able to employ a bit more finesse when tackling characters like Princess Leia who has already been announced for Star Wars: Rebel Heist #2.

Overall I think this issue is fun and drops a lot of interesting nuggets for fans of the Star Wars universe … on the one hand it’s fun … but, on the other hand the narrative could have been a lot stronger.

THE ART IS PASSABLE

I wonder if knowing what an actor looks like and being familiar with their on-screen appearances ultimately ruins any artistic experience you will have, as a reader, in comics because they’ll never quite live up to the picture in your brain?

Marco Castiello barely manages to make Han look anything like Harrison Ford unless it is a splash page or a close-up (and even then, it’s hit or miss). When the focus of Star Wars: Rebel Heist #1 is Han Solo as portrayed by Harrison Ford you have to nail it or your readers will become jaded, perhaps even cynical. It’s distracting when Solo appears scruffy to the point of being unrecognizable, if he were not wearing one of his most famous on-screen outfits.

Beyond the discrepancies of Han Solo himself Castiello can’t even draw the issue’s narrator consistently – which is in and of itself distracting. He does a good job with the world of Star Wars, though. In particular the Imperial Space Station interiors are very familiar. In panels like this there is a sense of familiarity and comfort – this is a world we recognize! However, good looking hallways are hardly enough to carry the weight of an entire issue.

PICK IT UP FOR SOME FUN

Star Wars: Rebel Heist #1 is just that: fun. The $3.50 price point is a bit steep for a middle-of-the-road issue, but if you love this universe and everything that comes with it and want to read a pretty cool series of chase scenes with a little narrative twist at the end it’s worth taking the time to flip through.