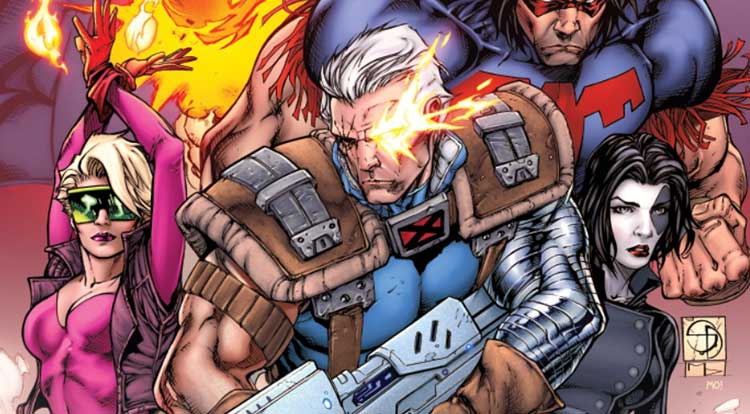 Journey back to the days of the 1990s, when two characters debuted who would change the face of comics – Cable & Deadpool! Today, Marvel is proud to announce the exciting DEADPOOL VS. X-FORCE, a new limited series from the explosive creative team of Duane Swierczynski and Pepe Larraz! In this all-new tale, we learn of the pair’s first meeting, well before their first comic book appearance in New Mutants #98, as Cable and his soon to be X-Force race through the timestream to stop the reckless mercenary Deadpool before he destroys American history for good!

“Deadpool’s gone back to key points in American military history: the Battle of Germantown during the Revolutionary War; Gettysburg during the Civil War, and then… well, I can’t say anything else, because you know how one little musket ball has a funny of changing the course of human events,” says series writer Duane Swierczynski.

Harkening back to the earliest days of X-Force, this series promises to offer a time-jumping tale featuring that truly resonates the style and tone of the 90’s as Swierczynski is quick to emphasize, “OH THERE WILL BE GUNS, 90s style, although in some cases they’ll be fused with some old-school killing machines.”

“Every script I get from Duane is a blast and a half–and then Pepe gets a hold of it and really kicks it into high gear, says series Editor Jordan D. White. “For fans of the 90s, the American Revolution, and everything in between, this is going to rock.”

This July, join the Cable and his band of mutants, X-Force, as they hunt Deadpool through time to prevent him from forever altering the history as we know it! Can Cable and X-Force stop him before burning down the fabric of American history? And will they set things right, even if it means their own destruction?

DEADPOOL VS. X-FORCE #1 (of 4)
Written by DUANE SWIERCZYNSKI
Art by PEPE LARRAZ
Cover by SHANE DAVIS
On-Sale This July!