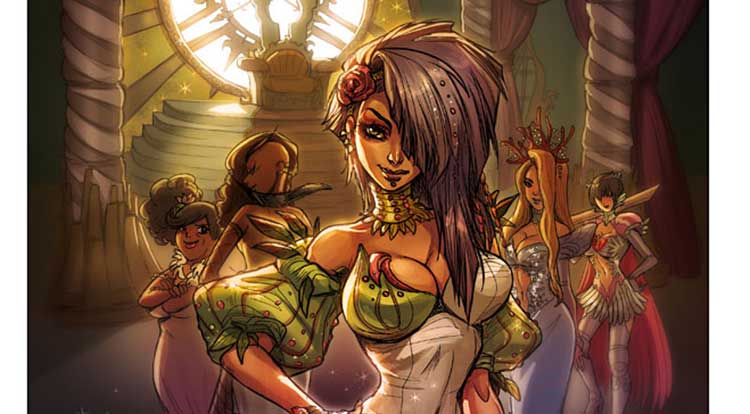 Following consecutive weekends at WonderCon and Calgary Comic & Entertainment Expo, Aspen Comics will be kicking off the month of May with signing appearances in local comic stores across the nation for Free Comic Book Day on Saturday May 3rd, 2014.

The publisher will offer a FCBD Worlds of Aspen 2014 flip book featuring exclusive zero issue stores for upcoming series Damsels in Excess and The ZooHunters, as well as two pullout posters for titles Jirni and Lola XOXO.

Vince Hernandez’s Damsels features all the trappings of a fantastical land: kingdoms, magic, talking animals – but no men. With a ancient threat looming, the princesses of the Five Realms will find their differences threaten to tear them apart. The ZooHunters, written and penciled by Peter Steigerwald (Lady Mechanika), is an intergalactic adventure about Abros, a ZooHunter – someone who captures animals across the galaxies for zoos on various planets – who gets to know his son Ty while training him to follow in his footsteps, all while trying to keep ahead of the forces that would impede them. A list of Aspen’s Free Comic Book Day appearances are as follows: