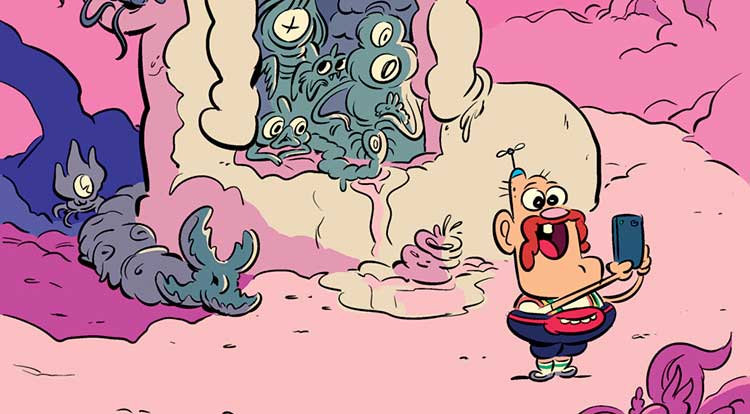 KaBOOM!, an award-winning imprint of publisher BOOM! Studios, and Cartoon Network Enterprises, the licensing and merchandising arm of the network, is pleased to announce that Cartoon Network’s hit comedy animated series, UNCLE GRANDPA, will be coming to comics this November. Following the announcement of the publisher’s first-look deal with Cartoon Network Enterprises in March, UNCLE GRANDPA is the latest property to be encompassed by the new partnership, joining previously-announced titles STEVEN UNIVERSE and THE AMAZING WORLD OF GUMBALL.

“When we had the opportunity to sit down with UNCLE GRANDPA creator Pete Browngardt and pick his brain we were instantaneously inspired by what him and his team have created,” said BOOM! Studios Editor-in-Chief Matt Gagnon. “Pete is a bonafide comics reader and that can only magnify what we’re doing on the series. We’re thrilled—UNCLE GRANDPA is going to have readers on cloud nine.”

Created by Emmy® Award nominee Pete Browngardt (Secret Mountain Fort Awesome), Uncle Grandpa is a show about everyone’s magical uncle and grandpa who travels around the world in a mystical RV. His mission is to help people wherever, however, and whenever they need it. Through his child-like and innocent ways, he finds unusual solutions to everyday situations. An eternal optimist, Uncle Grandpa’s glass is always full of something delicious and he’s always ready to greet the day (and everything and everyone) with his signature, “GOOD MORNIN’!”  Uncle Grandpa debuted on Cartoon Network last September as the #1 telecast of the week among boys 6-11. Uncle Grandpa airs on Tuesday nights at 8 p.m. (ET/PT).

“The rich characters and surreal adventures found in every episode of the Uncle Grandpa television series make it a perfect fit for a comic book adaptation,” said Pete Yoder, vice president of consumer products, North America for Cartoon Network Enterprises. “We’re excited to partner with the talented team at BOOM! to help bring Uncle Grandpa, Pizza Steve and, of course, Giant Realistic Flying Tiger to life in the pages of their very own comics!” UNCLE GRANDPA will make its comics debut in KaBOOM!’s Free Comic Book Day offering, KABOOM! SUMMER BLAST, which will be given away for free at participating comic book shops on Saturday, May 3rd, 2014. To find the nearest participating shop near you, visit freecomicbookday.com. UNCLE GRANDPA #1 is anticipated to debut in comic shops this November with a cover price of $3.99. Not sure where to find your nearest comic retailer? Use comicshoplocator.com or findacomicshop.com to find one!