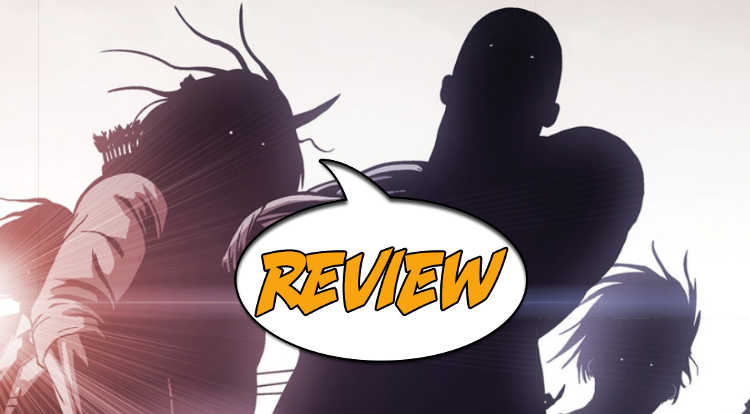 Sam is a super who can’t stop playing cowboy. A bunch of characters we’re not told the name of get brutally attacked by a group of former (maybe not-so-former), supervillains and the reader struggles to understand what is happening. NOT SURE I KNOW WHAT HAPPENED IN THIS ISSUE

It’s a maxim of the comic book universe laid down to us by Stan Lee that “Every comic is somebody’s first.” and, while that is not strictly true, I do wish that writer Alex De-Gruchy had taken that more to heart because I had absolutely no idea what was happening throughout the majority of The Fallen #2 – although I believe that underneath the mess there are some interesting nuggets.

The first three pages we see Sam (but no one says his name and I only figured it out through deduction of the solicit), rounding up a bunch of [presumably]bad guys in [presumably]the wild west in [presumably]the past. Not even 1/3 of the way through The Fallen #2 and the reader has no idea what is happening – not a good start. Now, assuming you’ve read the first issue that might not be such a big deal. The sheriff (also unnamed), physically abuses his prisoners while they insist that Sam is a “super”. It doesn’t take much of a leap in logic to assume that “super” refers to superheroes or metahumans or however one likes to think about it. There are a couple panels of flashbacks wherein we get to see Sam taking down these criminals and they attest to this extraordinary strength …

… and with this I have a problem. Sam doesn’t look superhuman (more on that in the art section of this review).

The sheriff, most conveniently, ignores his captives claims and Same leaves. I think? Across the next three pages he mopes around with a bunch of dead bodies, speaks to the ghost (hallucination?), of someone from his past and then we don’t see him again for the rest of the issue!

Cut to: three people riding in a wagon. There’s a banner that reads CALIFORNIA and, as nice as that is, I’d have appreciated De-Gruchy so much more if any of these characters had addressed each other by name. MINOR SPOILER: one of these characters dies. It is only after their demise that we learn their name and by that point it’s mostly too little too late. A bunch of people get their butts handed to them and a group of (supposedly), major supervillains are revealed in the final pages.

Even following the release of a first issue the second is still world-building and in the Fallen #2 it feels like De-Gruchy assumes everybody is caught up and has been as fixated on the characters and their world as he is. He lays out a bunch of interesting nuggets and plot points that truly would have benefited from more exposition.

If Michael Montenat was tasked with bringing Sam (of the mysterious last name), to the page as a former superhero with exceptional strength he’s failed the Fallen #2. Utterly. I’m very sorry to write that, but it’s true. In the fight flashbacks I alluded to above there is nothing about Sam’s posture, the criminals reactions or any sound effects on the page that would suggest that Sam is anything but a cowboy. He fails to stand up literarily and visually to Superman and his various analogues (Tom Strong, Supreme, et al), and while he doesn’t necessarily need to fly around wearing the classic cape/tights combo, it would have added credibility to his position as metahuman/superhero if he had at least appeared strong.

Beyond that Montenat’s art is fine. Just fine. A lot of the male faces (we see maybe three women throughout the entire issue), look similar and, as I’ve already stated, since so few characters are called by name this adds to reader confusion in telling people apart.

The art of The Fallen #2 is nothing too special, it gets the job done, Ron Riley is the best thing about it. His colours suggest the tone De-Gruchy and Montenat are grasping for, although unfortunately, not enough to save the integrity of The Fallen #2.

Monkeybrain Comics often have some of the best digital comics and, straight up, some of the best comic books out there. The Fallen #2 is not one of them. Even at $0.99 it’s hardly worth it. Skip the issue, sorry to say.