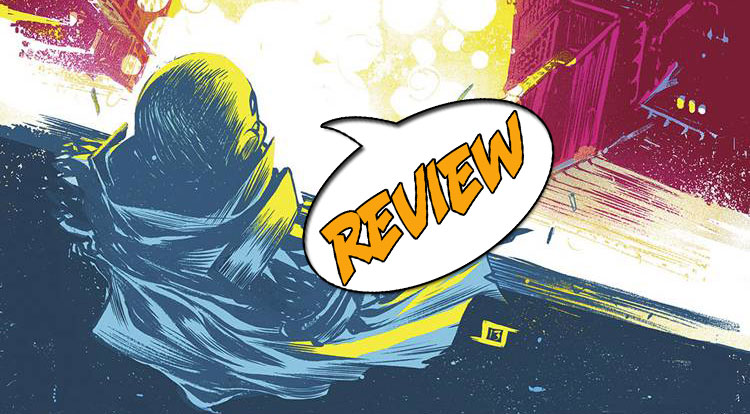 We’ve all seen stories of world-rending hero-villain rivalries, but Translucid takes the genre in a new direction. In Boom! Studios’ new six-part title, The Navigator takes on The Horse. Will the child narrator’s dream capture readers’ attention? Find out after the jump.

Previously in Translucid: The Horse has only recently been released from prison and has now come to The Apocalypse 3 for help in his new plot to ensnare The Navigator. Meanwhile, the story’s narrator deals with his troubling home life.

Echert and Sanchez put an unusual twist on the traditional arch nemesis trope that’s ubiquitous in superhero comics with their use of a frame story. Readers don’t get much outside information in this issue, as most of the storytelling is restricted to focusing on The Horse’s plans to lead The Navigator into a trap. The frame story is fairly straightforward: a young boy imagines the adventures of The Navigator to escape his unforgiving home life. We only get a few panels featuring the narrator; just enough to guess at his age and be charmed by his boyish imagination. The characterization is fairly solid, and even without additional characters in the frame story, it’s easy to get a sense of who the narrator is. The characterization for The Horse, who easily has the most dialogue out of all the characters, is similarly good. As he forges his allegiance with The Apocalypse 3 in the beginning of the issue, he begins to sound more and more crafty and threatening. That said, the dialogue is occasionally somewhat confusing and tends to skirt the line of cartoonish. It seems very much like a child’s idea of a super villain, for better or worse.

The relationship between The Navigator- who reminds me very much of Batman in his posturing and attitude- and The Horse is fairly straightforward. I couldn’t help but chuckle as The Navigator somberly declared The Horse the closest thing to a friend he had. The cartoonish plot to blow up the Empire State Building suited the story well, even if it did feel cliché. Frankly, the story of the hero and his nemesis is less interesting to me than the frame story; though that does not mean either fails to capture my attention

Baybliss’ art has an interesting style. Bold, retro colors combine with a more realistic style of line work and character design. The Navigator has an excellent design, with a cool, slightly mysterious costume reminiscent of Doctor Doom. The Horse has a similarly fun, if perhaps over the top, costume featuring a horse head that may or may not be a mask. His white 1940s mobster suit and head give him a surreal and threating look that really works for he story. The color pallet, however, is too extreme in other areas. Baybliss and Metcalf have a tendency to use contrasting colors, and unfortunately this works against them. The further into the issue one reads the more the colors seem disjointed.

Translucid is off to a pretty good start, with some interesting, if cliché, characters and a unique frame story. If Echert and Sanchez can maintain this level of intrigue the story will likely be a success. Translucid #1 is worth picking up if you like a classic hero-villain nemesis story. For that, it gets a solid 4/5 stars from me.