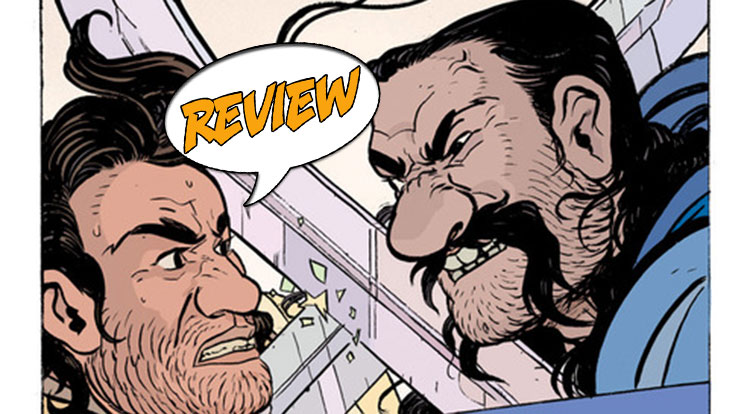 Chris Roberson’s Sovereign is a series of epic fantasy short comics based in a world which once knew gods, demons, and magic, and to which all three are returning. The first story follows a group of masked undertakers called the Luminari traveling to Khend. The second story takes place in Khend where their ruler has recently died and the right of succession is in question. The last story follows another group of travelers called Lothranists also heading to Khend. Each short comic is a snapshot of Sovereign’s vast world, giving the reader three different perspectives.

Previously in Sovereign: A group of three Luminari travel through the Lowlands. They find a village full of dead bodies and bury them. Soon, they are attacked by a mob of zombies. Janramir is the horse lord son of Khend’s ruler. He left his homeland with a group to hunt monsters. At the end of the trip, he receives news of his father’s death. Raven Goodstone with his companions Lady Evrendon and Commender Argus Mag Donnac are on a journey to Khend when their ship is ambushed by a sea monster. Commender Mag Donnac subdues the beast and they discover it is an undead creature.

Chris Roberson’s Sovereign #2 adds another three short comics to his expanding world, continuing the three storylines established in the first issue. These short comics are like a collection of fairy tales in comic book form. Also, the fantasy backdrop is similar to George R.R. Martin’s A Song of Ice and Fire series to the point of copyright infringement. There are several borrowed elements such as a group of undead hunters similar to the Night’s Watch, a nomadic people similar to the Dothraki and the concept of magic return to their world. Still there are some original elements to Sovereign. The story structure is unique where the reader is presented with three different viewpoints. Each story has its own way of telling a story, whether by real-time action or a character’s journal. The characters also represent the core classes within the world: the ruling class, the nobility and the common folk. It is great to see these different perspectives as they each deal with the return of magic into their lands in their own way. Since the three stories revolve around Khend, I think future issues will link all three stories together. Unfortunately, with three separate plots, character and story developments are slow. It is so slow that I was not emotionally invested with the established characters. There is a long excerpt regarding the history of Khend at the end that helps clarify the back story. However, I do not need a long exposition to explain everything to me if you can do it in the comic book.

Paul Maybury provides artwork for the Sovereign series. Sovereign’s fantasy art style reminds me of a dirtier, cartoon version of Frank Miller’s Dark Knight Returns. Many of the background characters are misshapen. Also, the large action sequences tend to look like clusters of obscure chaos. Still the overall design is executed very well. I like the structure of each story, with each comic introduced with its own title and quote. Also, the character designs are distinctive with few visible flaws. The background panels of Sovereign’s locations are vibrant with a large amounts of detail.

Chris Roberson and Paul Maybury’s Sovereign is at a snail’s pace so far with two issues. With epic fantasy, a lot of development goes into world building and at its current pace, Sovereign’s story has a long way to go. The story has potential with its unique setting and characters, barring a few borrowed references from modern fantasy concepts like Game of Thrones. However, the story needs to speed up to its more exciting parts in order to get readers interested.