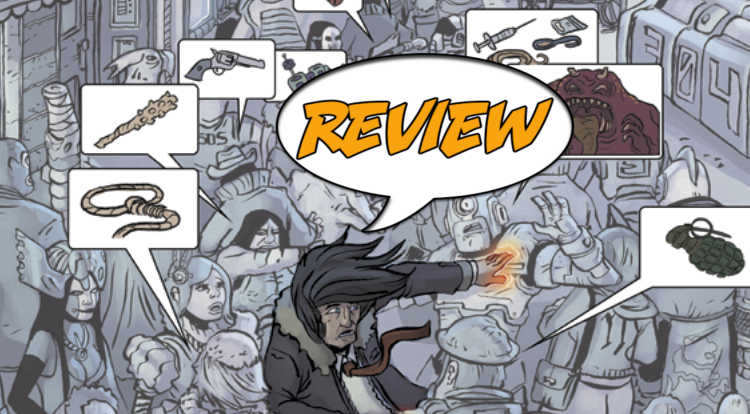 The Life After #1: Early Termination Review

Life is monotony. The same routine. Every day. Until one day you decide to step off the bus after that girl who always drops her handkerchief and all the constructs of your world slowly begin to fall away.

“… at 5:58 every day …” and with the world’s natural alarm clock Joshua Hale Fialkov launches into the Life After #1: Early Termination – a tale about a [presently]nameless protagonist who could not be more asleep in his waking life.

JUST SO YOU KNOW: The Life After #1: Early Termination doesn’t hit stands until July. In keeping with that, I’m going to give you the best review I can without spoiling any of the really good stuff – and there is really good stuff.

The first three pages of the comic establish his routine or rising, bathing, working, riding the bus home, watching the girl drop her handkerchief, watching television and going to bed. His routine, which may not differ too much from that of many people alive today, comes across as nothing short of mind-numbing and, really, very sad.

On the fourth page something happens and the protagonist slowly begins awakening to exactly what kind of world it is that he lives in, what sort of circumstances have brought him here and the realization that he will have a long way to go before the end of this journey. The twist/reveal Fialkov has on the twenty-third page (from a historically relevant and rather interesting figure), is not the biggest shocker I’ve ever come across. If the reader carefully examines the title: the Life After #1: Early Termination and reads the solicit provided by Oni they can figure it out. In spite of that, it’s handled in such a jovial tone and spoken aloud by such an unexpected person that it is no less impactful and charming for the lack of true surprise.

Even though we don’t meet a lot of characters through the pages of the Life After #1: Early Termination (a mere two that we can identify with in any meaningful way), Fialkov has a great talent for writing each individual with a unique voice – something not enough big two comic writers are doing these days. Not only does this help ground this story in something like reality, but it helps keep the dialogue snappy across the panel.

Joshua Hale Fialkov already has a winning series with the Bunker and if this early copy is to be taken as proof The Life After will shape up to be a series of equal – if not greater – quality.

Now, I’m not familiar with Gabo’s work; The Life After #1: Early Termination marks the first time he’s come across my comic reading path. Initially, I wasn’t certain how I felt about it. He has a distinct style, more cartoon-y than realistic and not strangely unique just for the sake of it (does that makes sense?), like I’ve seen from other indie comic artists in the past. About three pages in I decided that I loved it and the issue was smooth sailing from there.

The protagonist looks like a young shmoe, average, but distinct enough to stand out from other people in a crowd. Some of the linework feels loose (for lack of a better world), which lends itself to the kind of world and reality Fialkov has penned.

Gabo’s artistic ability extends from the pencils to the colours of The Life After #1: Early Termination and when on page four (as mentioned above), “something happens” it is as bright and shocking an experience for the reader as it is for the protagonist on the page.

Gabo has a distinct style that enhances everything else going on in The Life After #1: Early Termination.

Read the title of this section. The Life After #1: Early Termination is beyond neat, Joshua Hale Fialkov and Gabo have a strong hold on what they are doing, and you know you want it.