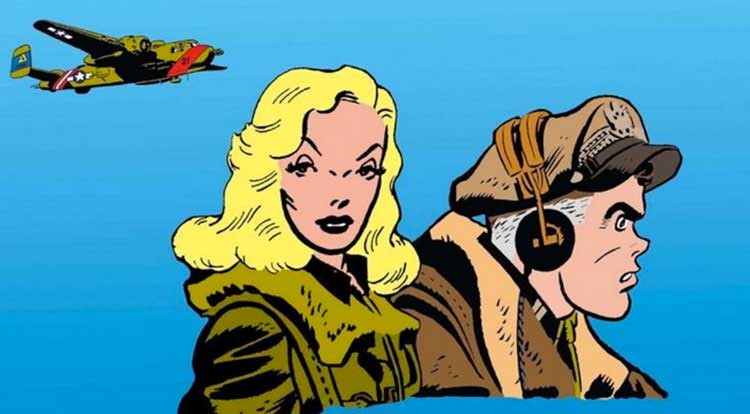 Steve Canyon: The Complete Series Volume 1- Fans of Milton Caniff’s Steve Canyon will have an opportunity to read online the all-original comic book incarnation of one of the most important comic strips ever. The comic book adventures of Milton Caniff’s Steve Canyon, one of the most popular and enduring comic strips from the late 1940s through the 1980s is joining Hermes Press’ line-up of classic comic book reprints. Hermes Press has painstakingly restored the artwork of Milton Caniff, William Overgard, and Ray Bailey so that it looks better than the originals. Fans of Steve Canyon can now read these rarely seen adventures in all their four color glory. Find it on Comixology at http://tinyurl.com/mme6tqb for only $14.99.

Johnny Hazard The Complete Newspaper Dailies Volume 1- Frank Robbins’ masterpiece, one of the all-time greatest action/adventure newspaper comic strips, Johnny Hazard, is back! When Johnny Hazard first saw newsprint it was near the end of the Second World War. The first storyline in the feature finds Johnny escaping from a Japanese prisoner of war camp by stealing an enemy airplane. From there his adventures were packed with never-ending action, Veronica Lake-esque women, and classic bad guys. Now you can see it all from the beginning, complemented by the work of one of the master artists of the comic strip medium, Frank Robbins. Reproduced entirely from original King Features press proofs. Find it on Comixology at http://tinyurl.com/jwhy4g9 for only $14.99.