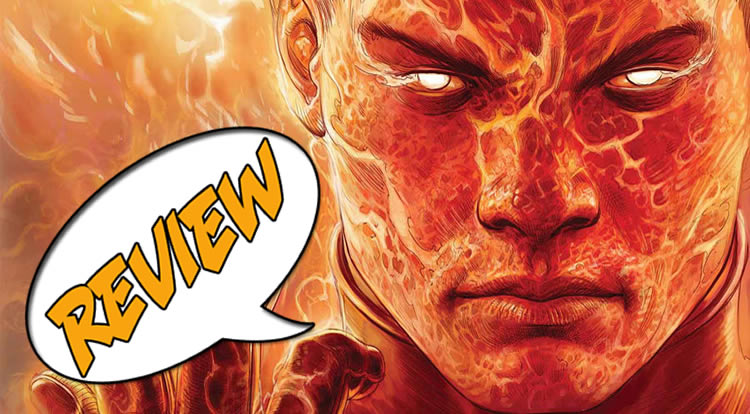 There are two axioms in comics that I truly believe: 1) Classic characters are just that because they work, and 2) There are no bad characters, only bad treatments of characters.

I’ve also noticed and commented on the fact that heroes from previous eras of comics are getting their chance at a new lease on life, and now that includes the Invaders, a team from World War II that I have always enjoyed whenever I read their exploits.

I’m glad Marvel has given Cap, Namor, the android Torch and Bucky Barnes a new book so they can strut their stuff for today’s readers, and their comic has become a favorite of mine!

Previously in ALL-NEW INVADERS: “The Invaders incursion into Hala, the Kree Homeworld, has begun … and already our heroes are in trouble. Now the team must fight a Kree-controlled God, but which God? From which panetheon? And how can they defeat an immortal with unlimited power? See Namor unleashed, Captain America fight and the Human Torch turn up the heat!!! And what is the dangerous side mission that only Winter Soldier and Aarkus the Golden Age Vision can complete?”

CLASSIC IS AS CLASSIC DOES

It says quite a lot that many of these heroes have continued to be forces to be reckoned with in the Marvel Universe literally for decades. Cap’s at a huge high, with his successful Captain America: The Winter Soldier film doing very well at local box offices, not to mention comics sales.

Namor has had his ups and downs, but he’s got a lot to do in the MU today, so it’s good for him to appear. Also, with Bucky’s transformation to the Winter Soldier working well, it makes sense for him to be on the team.

The Torch has been treated particularly well in this comic, with him trying to live a normal life in issue #1, only to have the Kree rip that away from him. It’s a smart idea to make him as human and as relatable as possible.

And they continue to work well together, easily meshing again after all these years. As individuals and as a team, they exemplify the word “classic.”

THE INVADERS … IN SPACE?

I have to say that when the Invaders set out to right wrongs in space, that surprised me. I’d never seen them do that before, and it grabbed my attention right away!

This storyline, which will conclude in issue #5 next month, has been filled with shocks and surprises all the way. This month, we discover just what’s going on, and it makes perfect sense. As always, Cap’s in command, and even when it looks like he’s surprised by an enemy move, I know he’s got something in mind to counter their evil ways!

I really enjoy both the character interaction and the battle sequences, both of which shine this time. Mr. Robinson has a strong handle on both, and it’s great to read the Invaders doing so well again!

I’ve long been a fan of Steve Pugh’s art, and it feels like he’s upped his game a notch or two in Invaders. The dynamic feel of action as well as his ability to create facial expressions that the reader can instantly feel and understand makes this book a joy to read.

I also have to say that the colors provided by GURUeFX help make Mr. Pugh’s art pop off the page. Very well done! I have to remind myself that I’m reading a book instead of watching a TV show many times.

BOTTOM LINE: Classic Characters Who Deserve New Life Are Getting it in All-New Invaders

I’m old enough to remember the occasional annuals that featured Invaders’ adventures, and I loved the contrast between Namor, a water-based hero, and the Torch, a fire-based hero. Then, too, Cap and Bucky were the brains and had their share of muscle, so it all blended together well to me.

All-New Invaders is picking up from those golden years with this title, and I’m so glad they have!

If you haven’t been reading it, I highly recommend this series! Check out your local comics shop to see if they still have back issues and, if not, go digital so you can keep reading the book moving forward!

You can listen to my recent interview with artist Steve Pugh in my Wayne’s Comics podcast at this link!