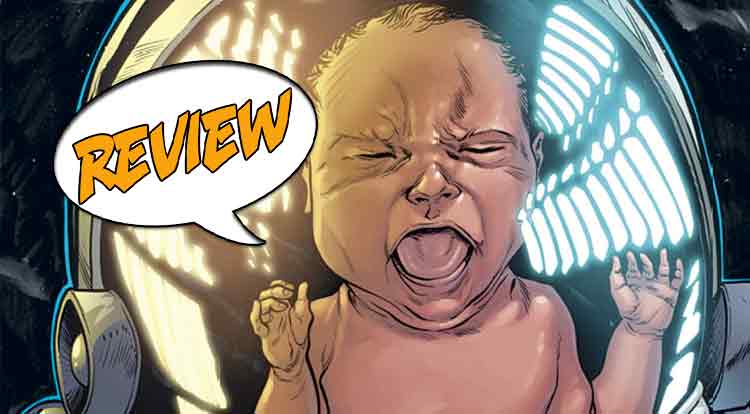 The only book on the stands that could combine babies, Presidents, and aliens and not be a mess. Read more about the newest issue of Letter 44 after the jump.

Previously in Letter 44: the crew of the Clarke fight the aliens while gathering important intelligence, and President Blades desperately wants to talk to his predecessor.

THE WEST WING BUT WITH ALIENS

There’s a certain strength with setting your genre story in a familiar setting. By dropping his story of alien intrigue within the office of the presidency, Charles Soule’s Letter 44 is a yarn that is one step removed from The West Wing. Something that any fan of politics would recognize, and probably appreciate. Though the settings of stories can be strengths, they can also lead to weakness. Letter 44 with it’s familiar episodic television similarities instantly leads itself to the feeling that this should be a season finale. Issue six’s are usually the last of a trade. So how does this issue measure as a temporary conclusion?

The crew of Clarke make an interesting discovery. Giving the readers a broader context of what the alien’s actual intentions are. Combine that with the birth of a baby on the ship, and the astronauts arc in this book is easily the strongest parts of this issue.

Where this issue lacks is in the tale of President Blades. Which is sad, since he was the receiver of Letter 44, the original hook of this entire series. His entire motivation in this issue is to send a big “screw you” letter to predecessor. What does this accomplish? Well, it does shut down the outside threats that his predecessor has sent his way, but it also hamstrings the character.

The President was set up in this series as a man hampered with a great burden. An analogue to President Obama, if you want to take the analogy that far. But his actions in this issue don’t show the character in a heroic or presidential light. It makes him petty and a little bit of a cranky child. A moment that could have propelled this character over the top is left to us to read completely in captions. Which undersells the scene, and makes me doubt his motivations. If the president is not a hero in a presidential drama, it makes me have a hard time to invest in their story.

Alberto Jimenez Albuquerque’s art has been strong in previous issues. Perhaps it was the overly dialogue heavy exposition of this issue that made it come up lacking. There were a lot of scenes, perhaps too many, of talking heads in this issue. So focusing on characters sitting in rooms made the artist’s weaknesses very apparent.

THE BOTTOM LINE: WILL SEASON TWO BE BETTER?

Charles Soule’s Letter 44 has been very strong up until this issue. However, the problems of this issue are too hard to ignore. Some of this could be attributed to treading water. Whereas every other issue of this series seemed to have an important change or event, this issue seemed to be about dialogue. I hope Letter 44 rights its course, because I think this series is an amazing concept. Plus I’m a sucker for political dramas, but if something worthy of the characters doesn’t happen soon, I’m going to jump off the good spaceship Clarke soon.