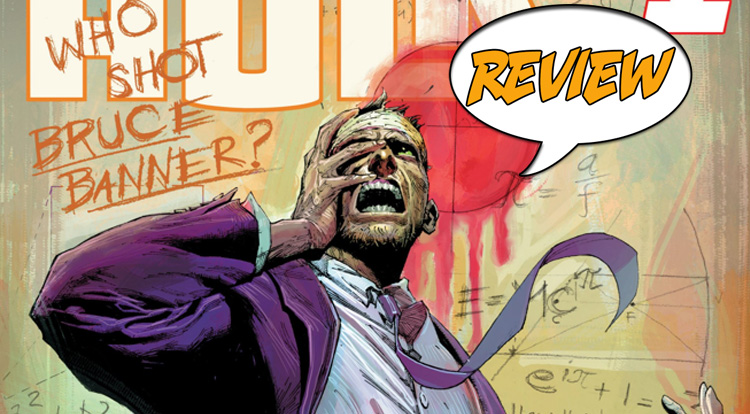 Bruce Banner (and his large emerald counterpart) have been working with SHIELD, under the command of Maria Hill, traveling the depths of time, space and dimension to fight the good fight and properly channel his rage.  Things are about to get much more complicated…

Previously in Hulk:  The gamma bomb explosion that transformed milquetoast professor into giant green rage-monster thrust Bruce Banner into the spotlight, for good or ill.  In his time, he has fought most of the Marvel Universe, teamed up with the rest, and been targeted by various militaries as public enemy #1 and/or a destructive force of nature.  Now, he’s working for SHIELD, but that doesn’t mean that there still aren’t a lot of people who hold grudges against the Incredible Hulk…

I’m not a huge Hulkamaniac, but I had been keeping tabs on Waid’s relaunched ‘Indestructible Hulk’ series, and found it to be some really interesting stuff, even if I found the art to be somewhat ho-hum.  With the announcement that Mark Bagley (one of my favorite artists going all the way back to ‘Strikeforce: Morituri’) would be joining Waid, I found myself both excited and annoyed to add another title to my pull list.  This issue doesn’t waste any time getting to the point of the cover legend, as we open with a brilliant neurosurgeon being taken by Agents of SHIELD to a remote location, and told that only his skills can save a patient in their care.  The man is both shocked and horrified to recognize the face of the patient as Robert Bruce Banner, aka The Incredible Hulk.  With some of the All-New All-Now Marvel Now NewNow issue #1s, we simply get a continuation of the previous storylines as if no relaunch had occurred, but Waid & Bagley take the time to give us the Cliff Notes of Bruce Banner’s origins and history, through an interesting framework: neurosurgeon Dr. Aaron Carpenter was an old schoolmate of Bruce Banner’s from years previous.  He performs the operation to save the man, but when his hosts reveal that their claim of working for Nick Fury is a ruse, Carpenter has to consider for the first time whether he can take a life.  It’s very tense stuff, and Waid’s writing makes it even more so, with Carpenter wondering if he and the other kids might have done anything to stop Bruce Banner’s disastrous life path.  “We are each the hero of our own story”, the narrative ruminates, before turning everything on its head with a big twist.

LOVE ME SOME MARK BAGLEY

Though not as vociferous as the hatedom aimed at the likes of Mike Allred, there are those who dislike Mark Bagley’s art, finding him too stylized or sketchy.  It’s a complaint that I occasionally share (especially in DC’s ‘Trinity’ series), but this issue’s art avoids all such questions, with Bagley and Hennessy delivering crisp and fully rendered art, and a couple of panels that are mind-blowing, particularly a shot down the length of Dr. Carpenter’s scalpel.  When the Hulk arrives, he is a terrifying force of nature at the same time as being our hero, and his rampage is startling.  I especially appreciate the fact that, even though his skull is open from brain surgery, Bagley and company don’t try to shock us with a gory shot of brain matter, instead giving us glimpses and shadowed shots that make the horror of Bruce/Hulk’s dissection more terrible.  As with any #1 issue, I have to assess not only whether it’s successful as a story, but whether it serves as a suitable entry-point for the hero’s adventures, and this one most certainly is.  Even someone who had no interactions with the Hulk in the previous 50 years would be able to get everything you need to understand what his story and status quo is from this issue, and the final page reveal is a legitimately shocking moment…

THE BOTTOM LINE: WHAT A STINGER!

Waid is a writer that I trust implicitly, based on the strength of his previous work and his perspective on the Marvel Universe, so the last page reveal of the ramifications of Hulk’s rampage are intriguing rather than terrifying, leaving me wanting to know how our hero is going to get out of this jam.  With a strong performance in both the writing and the art, Hulk #1 hits a sweet spot, making for a good #1, a strong issue and a great relaunch for one of Marvel’s most enduring characters, earning a very impressive 4 out of 5 stars overall.  The last few pages are, in themselves, worth the price of admission, even at $3.99 per issue, and I’ll be adding this one to my pull list ASAP…