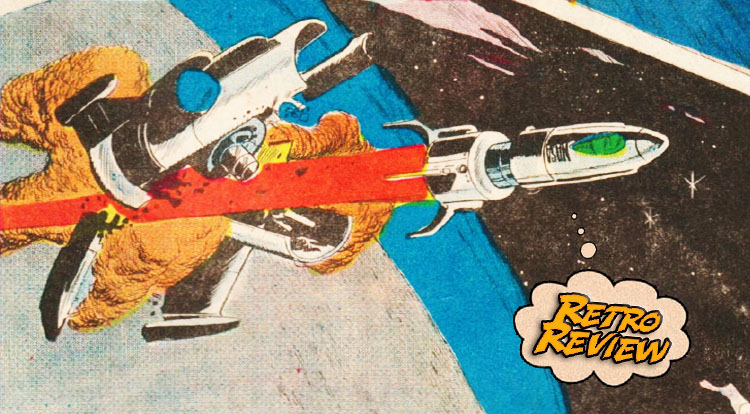 If you’ve every bought or sold old comics, or haunted the quarter bins of your local shop, you’ve probably bumped into many Charlton Comics.  As the original printer of Captain Atom, the Question and others (as well as one of several publishing houses to handle the Blue Beetle property, as well as the originator of the beloved Ted Kord version), Charlton Comics is mostly a footnote in the history of comic books.  Of course, that doesn’t mean they didn’t create a few comic gems in their four decades of publishing…  Your Major Spoilers (retro) review of Charlton Premiere #2 awaits!

Previously in Charlton Premiere: The Charlton Comics story is one of the more fascinating bits of comics ephemera, dating all the way back to the second World War.  Rather than working with external printing and distribution companies, as nearly all the other publishers did, Charlton handled the entire comic book creation process in-house at their Connecticut plant.  Indeed, an oft-repeated story was that Charlton made their real money in printing song magazines and such, only printing their comic book output to keep their ancient printing presses running.  (Whether this was because it was cheaper to do so or because the ancient printing assembly would have stopped working otherwise varies by who tells the story.)  Either way, Charlton’s four decades worth of comic book output is wildly inconsistent, featuring a vast array of utter drek.  Of course, there are noteworthy periods of their history as well, including their 60’s Charlton Action Heroes line.  Those characters, including Captain Atom, The Blue Beetle and The Question were sold to DC in the 80s, and Charlton Comics shut their doors in 1986, leaving behind a massive library of comic books, ranging from bad to indifferent to remarkable.  This is one of the remarkable ones. We’ve done a LOT of Retro Reviews here at the mighty Major Spoilers, and a lot of them have required a lot of Photoshop work to be readable (especially some of those old DC books that are too expensive for a schmuck like me to afford in high-grade), but never have I struggled with a book like this one.  As I mentioned before, Charlton’s printing presses (originally designed for printing cereal boxes) were housed in the Derby, Connecticut headquarters, and were pretty old even in 1940-whosis.  Add to that the (cheap) paper stock they used, and you got yourself a serious case of what the collectors call “browning.”  Pat Boyette’s art in this issue is really remarkable, with subtle lines and shading, which made these images a tremendous pain in the neck to do, but all y’all Faithful Spoilerites deserved to see this work.

Aaaaanyway, in a time after the end, a young girl asks her father to tell her about what the world used to be like, leading him to recall a time much like the 60s era in which this tale was published, with many different factions rattling their sabers in nationalistic frenzy.  In order to try to end war, one country created an ultimately powerful weapon to deter others from attacking them.  But what would make this different from any old neutron bomb, you ask? This Doomsday Device trumps even the garden variety Doomsday Device, triggered as it is by any atomic explosion, and set to destroy the entire planet at the slightest indication thereof.  That last panel is pretty amazing work in and of itself, a super-dramatic angle that is both majestic and terrifying.  Most impressively, this issue (like the Metal Men debut we discussed a couple of weeks ago) was reputedly slapped together on a short deadline by writer Sergius O’Shaugnessy (also known as future legend Denny O’Neil) and Boyette.  Unfortunately for the peace-loving peoples of this world, not every nation shares their peaceful intentions, and one small European nation uses the option to attack with previously archaic, non-atomic (but still high-casualty) weaponry.. An ironic end comes for the evil commandant of Somethingovia, as he is consumed by his own weapons, as the entire atmosphere of the Earth (if it *is* actually an Earth) is ignited, and millions die instantly.  The two brave astronauts who tried to counter the fireballs leave Earth for Venus, while the few survivors left on the surface (or, to be honest, *under* the surface) find themselves changed by the firestorm… As someone who grew up during the Reagan Administration, with the subtle expectation that nuclear war could be imminent at any moment, this story hits a few old buttons in the back of my lizard-brain, and I imagine those who who grew up during the height of the Cold War will find that feeling even more pronounced.  Months pass, and as the mutant populations discover the new abilities inherent in their transmogrification, our two astronauts arrive on Venus, only to discover that someone beat them there!  A strange monstrous presence, a creature who disappears and reappears at will, stalks them, until the men finally set a trap for him… How did a human get to Venus (which apparently has an atmosphere, but let’s not dwell on that) without a ship?  Our astronaut pals wonder the same thing, and head back to their home planet with their new prisoner.  But, having used up all their rocket fuel, they have to switch on their emergency backup engines… Hank and Joe: Astronaut Heroes.  There’s a Grant Morrison story in there somewhere.  Either way, the remaining population of the world has to deal with the terrifying realization that they survived the apocalypse only for a couple of spacepod jockeys to trigger the super-apocalypse.  I’ll be honest with you, there’s a lot of Silver Age goofiness in the plotting, but I appreciate the parallels to atomic-era fears, and the loveliness of the art is pretty much worth the price of admission. Just look at that for a moment, and remember that the issue was (reputedly) cranked out over the course of a few days to fill an issue of a comic that existed because the guys in the front office needed a loss-leader for their more lucrative printing gigs.  It’s an amazing bit of work, made even more so by the juxtapositioning of the toning effects with the limited color, something that Boyette apparently only added at the insistence of Charlton editorial.  Fortunately for Joe, Hank and the bedraggled remnants of humanity, the answer to the question of how the mutant got to Venus is simple: He was one of the technicians who created the Doomsday Device, and his particular mutation includes the ability to teleport across not only space, but time, and he has a plan to return to the moment the D-Device is activated… But, as the Satanic being returns to the future, the question becomes: Did it work? I am utterly in awe of Boyette’s work in this issue, especially on this final page.  Throughout the issue, the panels have been strange, fractured things, offsetting the reader’s perspective with the equivalent of a Dutch Angle (something you’ll know about if you listen to our ‘Zach On Film’ podcast.)  It’s only here, as the world is (at least temporarily) safe, do we return to the standard straight-panel technique of the era.  Though the story’s events are over-the-top science fiction, the meditation on mutually assured destruction and the futility of war is still strong forty-five years down the line.  Of course, one thing in the issue that I wanted to share with our more super-duper inspired Spoilerites comes in the house ad on the last page… Fans of the Ted Kord Blue Beetle should be aware that this came out around the time of his THIRD-EVER appearance, and all the fans of Judomaster…

…actually, there’s a pretty good chance that the majority of the fans of Judomaster are currently writing this review, come to think of it.  Bygones.  Action Heroes aside, this issue is one of the most memorable issues of the Charlton era for good reason, with art so pretty that even my issue’s 2.5 out of 10 grade doesn’t entirely mute it, and a story that resonates even in its excesses.  In short, Charlton Premiere #2 is well-worth the time it’ll take to find your own copy, and is doubly impressive for the quite turnaround in its creations, leaving ‘Children Of Doom’ with 3.5 out of 5 stars overall.