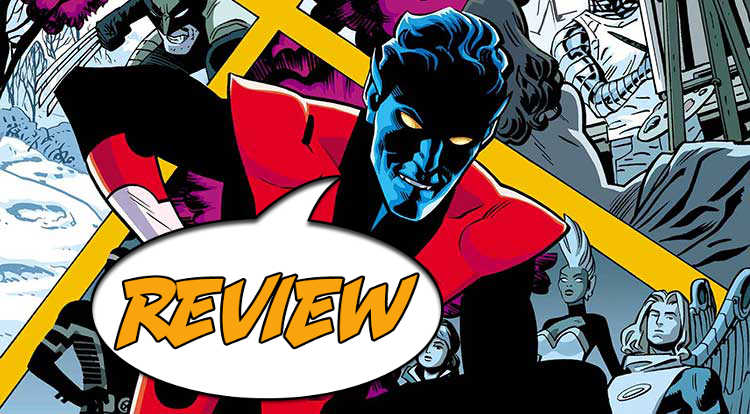 Nightcrawler returned to the land of the living X-Men in a pretty unspectacular series called Amazing X-Men and now that he is the titular character of his own book that theme continues. Let’s take the fact that Nightcrawler is my most favourite X-Men character in the history of ever and admit to that. Let’s also take everyone’s complicated feelings about Chris Claremont writing X-Books and admit to that as well before we proceed into this review.

Nightcrawler #1 opens on a scene all X-Readers are familiar with: the danger room. Kurt and the (once again – sigh), healing factor-less Wolverine are going head to head. However, this first scene in an issue titled Nightcrawler serves to teach the reader more about Logan’s voracity and inability to control himself the way one would expect of a mortal and less about Nightcrawler as a combatant or even as a person. Yes, fighting is cool and makes for great visual storytelling, but it seems like a strange place to start this new series. Storm is forced to intervene before Logan’s temper gets the better of him and he runs Nightcrawler through with his claws … and Ororo and Kurt proceed to have some sexual tension that makes me uncomfortable.

Then follows a montage of Kurt wandering through the Jean Grey School for Higher Learning reminiscing about how much things have changed since it was Xavier’s School for Gifted Youngsters back in his day. I have a big problem with this scene and here it is: I’ve seen it. Every time someone comes to the Jean Grey School (whether it be back from the dead or back from another hiatus), they always stalk the halls and opine that: “Gee, things have changed!” and, frankly, it’s boring. It was dull when Firestar did it in Amazing X-Men and it’s not better packaged up in blue fur – not matter how much I like Nightcrawler.

A few more pages into Nightcrawler #1 the elf and Rachel Grey have a heart to heart in his new flat. The flat is très chic although it felt a bit strange to have Rachel basically ask Kurt out on a date as she left. Has Nightcrawler always secretly been a ladykiller and I’ve just never seen it?

Further proof of this startling character development follows when Kurt just helps himself and handful of bamfs into Amanda Sefton’s apartment. (If you, like me, don’t know who that is she’s a Chris Claremont invention from 1976, the second Magik and was Kurt’s foster sister and former lover) They make-out … it’s kind of weird … and then a great big monster called Trimega busts down the door and Nightcrawler has to fight him.

Nightcrawler #1 ends with Amanda in her costume – which is actually really awesome – magik-ing Kurt and the bamfs away. It’s all a bit coo-coo crazy. The Nightcrawler of these pages is not the Nightcrawler I fell in love with as a little girl and I’m not sure how I feel about an entire series with this new version. Yes, characters change after their deaths, yes, they change with different eras, yes, they change with different writers, but there are so few scraps of Kurt Wagner that I recognize here to carry the crazy plot. Nightcrawler #1 feels like Chris Claremont threw all his ideas at the computer screen and decided that they all should stick.

Todd Nauck should always be drawing Nightcrawler. He does such astonishing things with the character and brings Kurt’s teleportation mutation to life in such a uniquely dynamic way that I daresay he is the Nightcrawler artist.

Nightcrawler #1 opens on a splash of Kurt Wagner in his most recognizable outfit BAMF!ing over a background of X-Men pink and it is glorious!

The aforementioned danger room fight with Wolverine is kinetic, both combatants look like they are working hard and Kurt has a wonderful not-quite-human quality in the way Nauck uses his features to express emotions – in particular the pupil-less yellow eyes that have become a staple of the character.

Even the supporting characters look awesome and Nauck manages to create a unique aesthetic in the designs of their facial features and updated costumes that still falls within the really clean house style I’ve come to expect from Marvel – especially in X-Books. He also deserves special credit for making Amanda’s costume as rocking as it is!

Todd Nauck and his art are the real reason to read Nightcrawler #1 because it’s stunning all the way through. The mutant and magik parts feel not-of-this-world, Kurt looks good and the action sequences are compelling in the most. I want posters of these!

THIS IS A TOUGHY

If, like me, you are a big fan of Kurt Wagner the fuzzy, blue, German, teleporting elf then find someone who’s already purchased this issue and borrow it from them. It looks good enough that it’s worth flipping through. If you have only a passing interest in X-Men or Nightcrawler I am sad to admit that you can probably skip this.