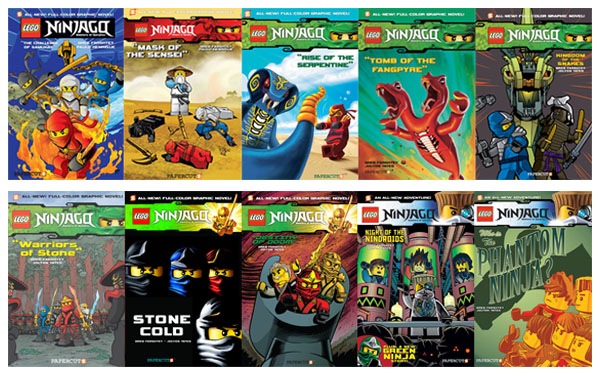 It seems like LEGO toys are everywhere these days. From movie theaters to the small screen to toy stores, LEGO characters and products are riding high. And now, thanks to graphic novel publisher, Papercutz, they’ve taken over bookstores as well!

The latest volume in the publisher’s LEGO NINJAGO series, “Night of the Nindroids” entered the NEW YORK TIMES BOOK REVIEW Graphic Books Best Seller list at the #1 spot. It’s the 8th volume in the series to do so, a sure sign of the enormous popularity of the company’s all-ages graphic novels. Sales of the latest volume have also helped the publisher hit another milestone, passing the 2 million mark in terms of total units sold for the series.

“LEGO NINJAGO titles have been a phenomenon for us,” explained Papercutz President Terry Nantier. “We’ve been back to press numerous times and it seems like we’re always struggling to keep up with consumer demand. I’ve been in the graphic novel publishing business for quite some time and I’d be hard pressed to name a lot of other kids ‘series that have hit that level of sales.”

What’s the secret to the franchise’s incredible success in graphic novel form? Papercutz Editor-in-Chief Jim Salicrup believes he has the answer. “For licensed publishing to really work, you need a great property. But you also need to focus on and appreciate the fans who made the property a success in other media,” Salicrup explained. “We’ve been very careful to not only be respectful of the NINJAGO characters but also supplement the LEGO Group’s media and story-telling elements. By including stories set between episodes of the TV show we showed kids that we were involved with the property and that we wanted to enhance their enjoyment of the overall storyline.”

That approach has paid off with the series print runs growing from volume to volume. Readership has grown to the point where NINJAGO volumes are regularly among the best-selling graphic novels of the year. And Papercutz is expanding their LEGO publishing program with new graphic novels based on LEGO LEGENDS OF CHIMA beginning in May.

“The love for the LEGO brand is sweeping the nation and we’re happy to get caught up in the excitement,” enthused Papercutz VP of Marketing Sven Larsen.  “LEGO NINJAGO volumes are true all-ages entertainment so it’s no surprise that they’re finding acceptance with a wide audience. I’m just glad we have more LEGO NINJAGO coming later on this year. The LEGO Group has done an amazing job of creating a passionate audience for LEGO NINJAGO and  we want to do everything we can to reward that loyalty.”

With nine LEGO NINJAGO volumes in print, more on the way, and a fan base that eagerly awaits every new release, expect the Papercutz office to be practicing their Spinjitzu moves for quite some time to come.

LEGO NINJAGO: “Night of the Nindroids” is currently available in bookstores and comic book stores across the Unites States and Canada. To find a comic shop near you go to http://www.comicshoplocator.com/ or dial 1-888-COMIC BOOK. LEGO NINJAGO is also available in the US and Canada on all popular ebook platforms.

ABOUT THE LEGO GROUP: The LEGO Group is a privately held, family-owned company, based in Billund, Denmark. It was founded in 1932 and today the group is one of the world’s leading manufacturers of play materials for children. The company is committed to the development of children’s creative and imaginative abilities. LEGO products can be purchased in more than 130 countries.