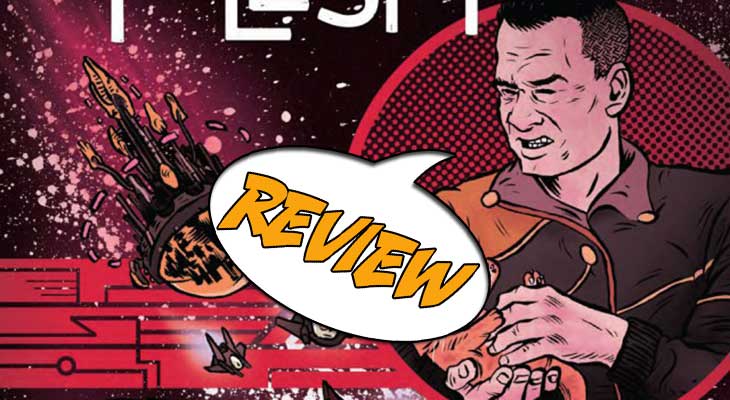 The crew of the Prospect, who are usually the best of friends, begin to butt heads for the first time in The Midas Flesh #4. When Joey’s principles and Fatima’s wisdom are called into question, how will the crew make their most daring escape yet? Find out more about this week’s The Midas Flesh after the jump!

Previously in The Midas Flesh: The Federation sent a group of special agents to reclaim the Midas Flesh and get the unconditional surrender of the ‘terrorist’ crew of The Prospect. However, Pilot Frances’ sudden betrayal of both her team and the Federation allowed Joey and Co. to escape temporarily after rescuing Fatima’s old flame Sluggo.

Ryan North is back at it again, giving us the excellent characterization I’ve come to expect from him. At the halfway point of what is to be an eight-issue story, we finally have most of the set up the story needs. The federation sends one of their most dangerous ships after The Prospect, seeking their immediate destruction. Joey’s sharp tongue is useless here and with the enemy ship filled with civilians the bulk of the conflict in this issue comes from the moral repercussions of using the Midas Flesh- or not using it. Fatima cannot bring herself to help use such a weapon on civilians, while Joey and Cooper consider it the best of several horrible options. Seeing Fatima put her foot down to support what she believes in is wonderful to watch although at times her dialogue seems like a far cry from the things she said in earlier issues. Given the immediate threat of death around them, however, this can be forgiven.

North once again gives us more of the wonderfully integrated backstory we got to experience back in issue #2, this time tying it to previous events. While the crewmembers of The Prospect are clearly friends, they have not always been a team flying across space to commit treason. In a surprising twist, it was Fatima and Cooper that came to Joey for her funding and skills as a captain for their mission. North reveals that, in the invasion that took his lover away forever, Cooper was tossed through a wall, only to discover the story of the Midas Flesh hidden there. After hiding away with Fatima to do research, the two approached Joey and won her over with the promise of freeing, not just her people, but everyone from the federation, using the Midas Flesh.

The writing in this new issue is really excellent; full of drama and space fights while still maintaining the integrity of the characters. Joey’s fight with Fatima is really heart wrenching regardless of which side readers take. Even once The Prospect’s crew decides to use the finger against their unyielding adversary, the intensity continues, with a three-page glimpse of the opposing crew in their final moments, before cutting to a two-page spread of the opposing ship, The Titanic, turning to solid gold at the last minute. The issue ends with North, Paroline and Lamb giving us a heartbreaking shot of Joey dealing with the consequences of her actions and crying alone in her bunk as Cooper reclaims the Midas Flesh.

ART THAT CONTINUES TO IMPRESS

Paroline and Lamb’s use of color continues to be the highlight of this series’ art. In previous issues the color pallets have been limited to a near exclusive use of orange and green. Now, as we clear the series’ midpoint, the colors have begun to shift with Paroline and Lamb now using shades of dark blue, most notably Oxford Blue, throughout the issue. This color really reflects the gravity of the situations the characters now face and gives the entire issue a more intense feeling. The images of space within this issue are particularly stunning, with stylized gradients highlighting the tension of the battle as well as the motion of the characters. The two-page spread of The Titanic exploding into a burst of golden wreckage is absolutely incredible and yet still sticks to this restricted color pallet. While even the gold within this issue is drawn in shades of green and orange, it all seems to fit together seamlessly.

Paroline and Lamb have also outdone themselves this week with their posing. All of the action sequences look great, and the characters always look as though they’re about to jump off the page. The panels’ perspectives are also particularly impressive and really add to the drama of the story. North, Paroline and Lamb have something special happening and I can’t wait to see their work as the series continues.

The Midas Flesh #4 does not disappoint, offering readers the great story and captivating art we’ve come to expect. With its diverse cast, intelligent writing, and stunning art, this series is not one to miss. If you’re not reading The Midas Flesh, you’re missing out. The Midas Flesh #4 gets 5/5 stars from me.