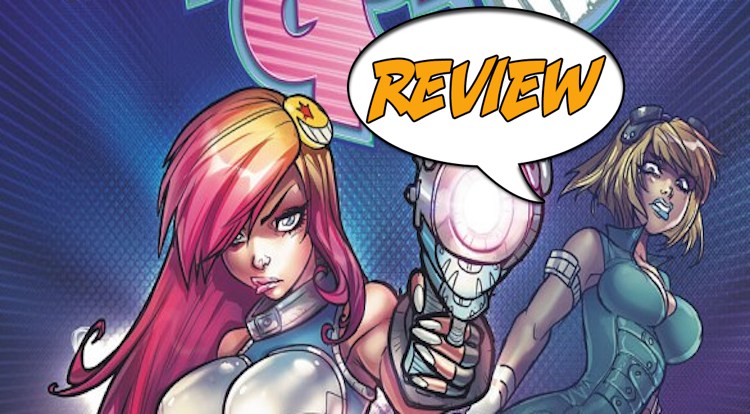 By WilsonApril 3, 2014No Comments4 Mins Read

The final issue of the entertaining cyberpunk adventure is here.  Is it a satisfying conclusion to the miniseries?  Read on to find out! Previously in BubbleGun: Molli and her team sprung her rivals from jail to help her rescue her sister, Devyn, from Vitadrone.  Things haven’t exactly gone to plan as Vitadrone’s forces and Molli’s former ally, Roman, have gained the upper hand.

BubbleGun has definitely brought the fun in the last four issues and the wrap up is just as entertaining and completely action packed.  Mark Roslan has done a wonderful job writing a simple, fun, and imaginative series.  This issue sees Molli and her crew overcome their obstacles, rescuing her sister and Asher from Vitadrone.  Molli has grown over the course of the five issues and it was nice to see her develop into a more responsible woman.  While mainly an issue of action, Roslan does a good job wrapping up plot threads, leaving enough to entice readers to check out any future issues that may come.  I liked the ending but some of it felt rushed and slightly predictable.  Before Molli’s team has a big fight with Vitadrone’s synthezoids, they shut down.  It wasn’t that difficult to realize that both Devyn and Asher played a part.  It’s a little convenient and I don’t know if it was because of the space restraints of five issues but it felt brief.  By the end though, there’s change and I find myself wanting to read more adventures in the BubbleGun universe.

This series has done a great job with imaginative and creative elements.  Even Josh Reed’s lettering does a cool thing where instead of censoring the word sh!t as such, there is instead a small image of a pile of poop.  I thought it was a great way to do it and it’s something I’ve never seen before.  All the machinery in the world is just as inventive.  Things like Molli’s BubbleGun bomb and Oleg’s giant robot arms are just plain cool and fit in the cyberpunk world Rosan has crafted.  There’s tons of neat stuff here and so many good things that I enjoyed the series quite a bit.

Mike Bowden has really killed it in the series and this issue is no exception.  His work has great energy to it and I would love to see his style animated.  Action is his specialty and he provides a nice flow and panel layout is different but never hampers the storytelling.  He also draws cool sci-fi machinery and while some of it is crazy or even ludicrous (see Oleg’s arms), it completely works.  This issue has some problems, mainly with faces.  Molli’s face, as well as some other characters, in some panels looks completely different.  I didn’t notice it much in earlier issues and it’s something that popped up this issue and a lot in issue four.  Maybe it was rushed but it was certainly something jarring.  The coloring is fantastic and pops and while the colorist has changed throughout the series, Erick Arciniega makes the change unnoticeable.  It’s just as energetic as the pictures and helps bring the world to life.

BOTTOM LINE: GIVE ME MORE AND I’LL BE BACK

BubbleGun was a fun ride all the way through and while a bit quick, the ending was satisfying.  I’m ready to read more and would just love a series where we see Molli’s team pull off heists.  Mark Roslan and team has done a wonderful job giving comic and cyberpunk fans a fun story brimming with originality.  While I had issues with some of the story, I had fun and if Roslan gives more I’ll check it out.  If you’re a fan of sci-fi or cyberpunk I suggest picking up the entire series, you’ll be pleased.