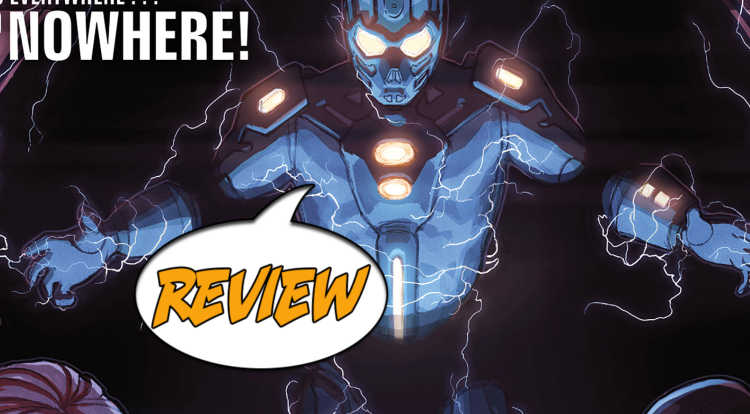 Scott Travers, through use of a mysterious set of armour, can move through our world via a “shadow-y parallel dimension” that he sort-of inherited from the man he views as his father figure – Bob. An equally shadow-y organization wants the suit, but Scott is not about to let that happen.

Open your issue of Blackout #1. Meet Scott. Scott is wearing a sleek black armoured suit (including helmet), and running away from an army reminiscent of both the Nazis and the Italian Black Shirts. He somehow makes an escape only to come face to face with a man trapped inside an even more giant mech suit who has lost the entire bottom half of his body in a rather gruesome way.

… but it’s a dream. Although Frank Barbiere doesn’t quite want to cheapen everything thus far with the it was a dream all along trope and has Scott’s inner monologue tell us that the dream is additionally part memory. We’ll let this hiccough slide because the story is interesting.

Scott wakes up on his friend Ash’s couch with the suit we’ve just seen him wearing tucked inside a crate. They debate the potential merits of turning in the suit versus keeping it and the most important thing that is revealed is that Scott was given (and I use the word loosely), the suit by Bob – his mentor. For lack of anything else to do Scott decides to be a good cog in the wheel of corporate capitalism and go to work.

Inside the building of Scott’s [presumed]employ the mech suit with the severed body is being examined by two scientists that didn’t quite make the casting call for Pacific Rim and some of the people above the glass ceiling are lectured about having lost the black armoured suit to begin with. When Scott shows up to work the lecturing continues from his boss Kaity for having taken some sort of extended sabbatical. Scott does a pathetic job at lying for someone who lives in the corporate world, but he does make a Sherlock Holmes reference so he gets a pass for that. When Kaity dismisses him and uses the phrase “walk through walls” Scott, naturally decides to do just that.

Outside the big science-y building Scott puts his fancy sleek black suit on and inexplicably creates a black bubble that allows him to show his boss up – not that Kaity is anywhere around to bear witness. Using his little black parallel dimension bubbles Scott sneaks up on an array of workers stripping the severed mech suit for “drives” and decides to take their plunder for himself. As luck would have it one of the workers spots his hand as it slips back into the dimension as we know it and a really cool fight-y fight gets started just as the ultimate of evil corporate-types stroll in through the front door blissfully unaware of what else might be going on.

Barbiere brings an ominous paranoia to Scott that I’ve come to expect from sci fi stories centering around the evil business types. As a protagonist he is charismatic and likeable even though the reader is not given much exposition in Blackout #1. To Barbiere’s credit he does a lot of showing rather than telling and trusts that the readers will put together the pieces and deduce for themselves all of the important relationships and information. It’s compelling storytelling, making Blackout #1 easy to involve yourself in as a first time reader. I’m interested in picking up the second issue and seeing where else Scott’s Bob-suit and black bubbles will take him as the mystery unfolds.

Colin Lorimer handles all art duties in Blackout #1 and he does so masterfully. The linework is slick and clean and adds to the sense that this takes place in the ambiguous future, but comes from a world that the reader could be familiar with. His characters each wear their own faces and look like the appropriate gender – yay! The look of Scott’s black armoured teleporting-sort-of suit is reminiscent of similar mech-style suits that have come before and it does look SO DAMN COOL with well placed highlights in the form of actual lights … as far as I can tell.

Everything is coloured in a blue scale with Scott appearing in an orange shirt, just to let you know that he’s special; the way that beautiful fighting girls always have crazy-coloured hair in an anime or manga. The room that the severed mech suit is stored in is coloured in a green scale seeming to add a sense of the sickly to the shadier corporate activities.

Lorimer knows the tones of Blackout #1 and plays to those in the most advantageous way, his art only enhancing the reading experience.

DID I MENTION COOL ARMOUR

Blackout #1 is a well-conceived, well-executed sci fi mystery placing the corporate overlords as the villain which will likely have a little twist ending to reveal protagonist Scott to be closer to the bad stuff than he ever thought. It’s made all the better by cool armour and mech suits and it’s an awesome comic book issue. Check it out.