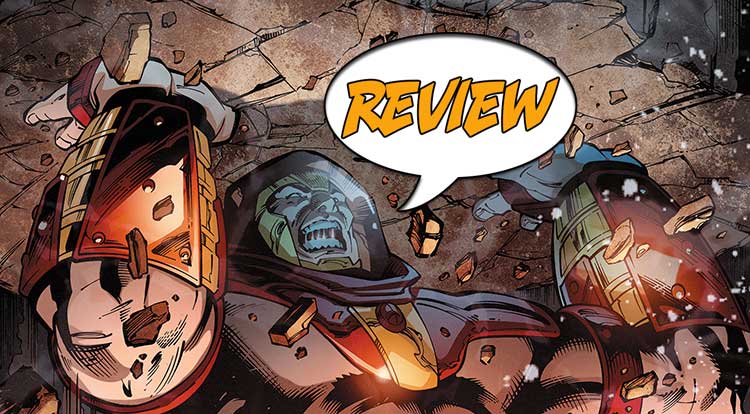 Mythical God-beings and crossovers, oh my! What’s happening in this week’s Aquaman? Okay, let’s just go ahead and get a few things out of the way; I have some opinions that may not find a popular response, but, ya know, I just don’t care. So, I’ll say it. I. LOVE. AQUAMAN. I do! I love his powers (did you know he can withstand direct gun fire? And he can speak ANY language?) and his personality and his badass wife (*dreamy sigh* Mera. She won’t take your BS, man). I love him when he’s Arthur and when he’s Orin. I love his real hand, his hook hand, and his magic water hand. Ahem…anyway, the point is, I really like Aquaman. Possibly-unpopular-opinion number two would be that, at least initially, the New 52 reboot of Aquaman was the only one that didn’t make me feel like a part of me was dying inside. (grumble grumble New 52 grumble grumble)

In this issue, some nutbag scientist steals Aquaman’s trident to try to use it to open a portal he believes is the gate to Atlantis. At this point we’re two pages in and already I have so many questions. Aquaman, I understand you’ve been in Atlantis for a while and aren’t used to people that aren’t afraid to touch your trident, but C’MON, MAN. How many times has this happened? Get your ish together. Then there’s the scientist guy. Dr. Evans. You mean to tell me that you went to the home of THE KING OF ATLANTIS to STEAL HIS TRIDENT so that you could OPEN A DOOR TO ATLANTIS?! Look, you seem like a nice guy who genuinely meant no harm, but (one of ) the things that confuses me is this: With the existence of Aquaman there is no question of whether or not Atlantis is real, because there’s an actual (half) Atlantean hanging out here. Do you really think that no one thought to ask him, “Hey, Arthur! Listen, you’re a pretty cool dude. You think there’s any way you could just give us a peek into what Atlantis is like?” He’s a hero. If he doesn’t want humans in Atlantis it’s probably for a good and noble reason; to protect all parties involved. And then later you say you “couldn’t risk (Aquaman) saying “no” to you borrowing the trident. You realize that, had you asked, he probably would have gone with you and been able to inform you that the gate does not, indeed, open to Atlantis, but, in fact, is A HELL PRISON.

Our B-story here doesn’t get so much attention, but I know it’s because the event itself took place in Swamp Thing #27-28. I want to be upset that DC is blatantly trying to force my hand into buying more comics, but I can’t be for a couple of reasons: 1) It’s what comic books do. Crossovers as far as the eye can see! Just so that whatever publisher it happens to be can make a buck. But, in an industry that has so heavily relied on a print-type publication for so long, can you blame them for pulling these stunts now, in a digital world? I can’t. 2) It’s working. I haven’t been following Swamp Thing since…ever. I honestly don’t know much about Swamp Thing (disgraceful for a comic book fan that lives in Louisiana, I know.), and I had never had the desire to. But this “global event directed at the oceans…[caused by]plant life] functioning as if it were one sentient being,” this has my interest, and I am really considering picking up the Swamp Thing issues.

So, just as we discover what ancient god it is Aquaman is battling, the issue ends WITH CHANNEL 52 BREAKING NEWS here to tell us that Superboy is not acutally Superboy because there’s a new Superboy? What the what? I’m not sure what is going on over in Superboy, but butter my butt and call me a biscuit, you know that in TWO PAGES DC has me wanting to find out, mostly due to Jorge Jiminez and his gorgeous black and whites, and by mostly I mean entirely. (PS, Superboy #30 is out this week [4/9/14])

This issue of Aquaman was pretty okay. It wasn’t anything spectacular, but it wasn’t bad either. I haven’t decided yet whether I’ll buy the next issue or not. As far as my recommendations to you on your purchase of this issue I’ll say don’t run out specifically to get it, but if you happen to be out and you’re in an Aquaman kind of mood, or you have been looking for a good jumping-on point, then sure. It’s only $3.