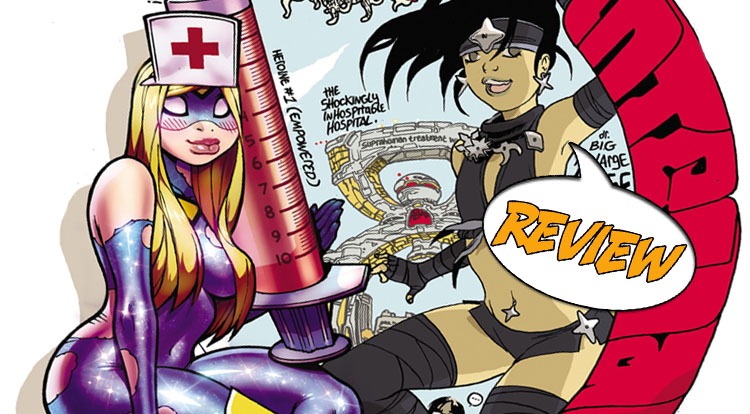 Thanks to the magic of the MSP trade paperback review, I have become a fan of Adam Warren’s energetic pin-up/superhero epic magnum opus, Empowered, but sometimes find the wait between trades interminably long.  Luckily, Adam’s one step ahead of me, as your Major Spoilers review of Empowered Special #6: Internal Medicine awaits! Previously in Empowered: Elissa Powers has long been a superhero aficionado, making it a dream come true when she discovered an alien suit which conferred on her great powers…  so long as it doesn’t rip.  Which it does, constantly, leaving Elissa essentially powerless, half-naked and tied up by super-villainous jerks.  She has managed to become a member of the Super-Homeys, who are also jerks, and made a few good friends (like her BFF Ninjette and her paramour Thug boy) along the way…

The issue opens with Empowered, bloody and clearly injured, stumbling through the suprahuman emergency room in a daze, as doctors and nurses swirl about her dealing with a superhuman mass casualty event.  This turns out to be a framing sequence, the quickly transitions to full-color flashback story, drawn by Brandon Graham in a slightly different style than creator Adam Warren.  Seeing the (usually gray-toned) characters in full color is interesting, as we see the events that lead up to the horror of the framing sequence: Empowered and Ninjette have been called in my Doctor Big McLargehuge (Heh) of the Suprahuman Treatment Wing of Purple Paladin Memorial Hospital to deal with an emergency situation.  An alien mothership (literally) hovers of the the city, in need of an emergency c-section, requiring someone with nigh-invulnerability (That’s Emp) and someone who can handle an enormous scalpel (the ninja, natch) to deliver her baby, or else the mothership will flatten the whole city with radioactive death-rays.  It’s a tall order, made even taller by the fact that our heroes first can’t find the surgery floor, then find that they have to hoof it nearly six miles in order to get to the baby.  Warren delivers his usual character work, and I especially enjoy the close friendship between Elissa and Kazue/Ninjette, each of whom has her own issues and neuroses, but clearly loves the other deeply.  Empowered also has more control of her powers this time out, even channeling her energy-blasts at will, which turns out to be quite helpful when the alien is shown to be carrying parasitic aliens.

Worse still, the parasite are able to mimic her own form, forcing her to battle giant, bulbous duplicates of herself that amplify all of her insecurities into clear view.  Still, Empowered gets some flat-out super-moments here that she hasn’t always had before, fighting off the monsters even as her suit tears, allowing Ninjette to make her way to the mother with a massive laser-scalpel…  The story is full to the gills with clever bits and references, and the Chekhov’s Gun that wraps the story up is not only cool, it shows off Empowered’s problem-solving skills.  As the issue wraps up, Ninjette and Empowered have a disturbing time-twisted encounter, putting the framing sequence in a whole new light and making me wonder what exactly is in store for them.  (To be honest, I’m actually pretty worried, and anxious to get the next full-scale chapter of Empowered.)  Both of the art-styles here are fun, and Graham offers some cute details like Empowered’s suit clinging even to her toes, and the overall cheesecake factor is lower than some previous issues.  There is still the strategic tearing factor, and Ninjette still fights in boy shorts and a halter, but neither character is presented super-salaciously, allowing the story and characterization to take center stage.

THE BOTTOM LINE: A FUN GLIMPSE OF A BIGGER WORLD

Certain comic books are fun to read just for the world building (see PS 238, Savage Dragon and Astro City), while others are all about clever little character pieces (see anything written by Brian Bendis, Kieron Gillen or Joe Straczynski), but Empowered hits both, along with glimpses of something entirely unique.  Empowered, as a character, is taking a journey from poor victimized schlemiel to full-on super-powered dynamo, and it’s really wonderful to see the gradual changes in her character.  Empowered Special #6 has a fun story, a couple of ingenious concepts folded in, and a foreboding visage of a terrible future, delivering the proverbial full Monty, earning a solid 3.5 out of 5 stars overall.  It’s not for everybody, certainly, but the world of Empowered is a lot of fun indeed…