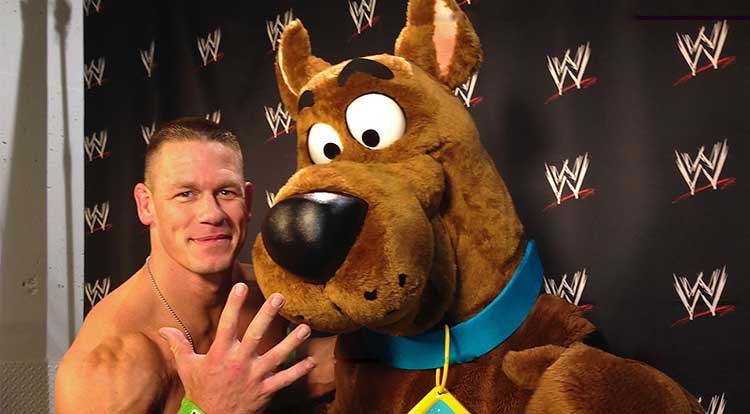 Scooby-Doo and the WWE Superstars were ever-present last weekend in New York – at a gala premiere and throughout Monday’s WWE Raw – to celebrate the release of the all-new animated film, Scooby-Doo! WrestleMania Mystery, co-produced by WWE® Studios and Warner Bros. Home Entertainment. The original movie is now available on Blu-ray Combo Pack, DVD and Digital HD.

In the film, Shaggy and Scooby win tickets to WrestleMania and convince the entire Mystery Inc. gang to travel to WWE City in the Mystery Machine to enjoy the show. But the trip quickly turns into another mystery as WWE City is full of secrets! A mysterious ghostly bear appears and threatens to ruin the show and steal the championship title belt. With the help of WWE Superstars John Cena, Triple H, Sin Cara, Brodus Clay, AJ Lee, The Miz, Santino Marella and Kane, Scooby-Doo and The Mystery Inc. gang team up to solve the case before it is too late!

Many of the film’s WWE stars attended an exclusive premiere in Soho on Saturday, March 22, and the Mystery Machine drove into the Barclay Center to deliver Scooby-Doo and Sin Cara to the blockbuster WWE Raw event on Monday night, March 24.

WWE Superstars Triple H, Sin Cara, Brodus Clay, AJLee, The Miz and Kane, all of whom (except Sin Cara, who is silent) provided their voices to their own characters in the film, were on hand for the world premiere. The phrase “childhood dream come true” was spoken by virtually all of the WWE stars in regards to being featured in an animated movie alongside Scooby-Doo.

“To be in the booth, recording for a Scooby-Doo cartoon – I’m there all day, every day!” exclaimed The Miz. “Knowing that I’ve been immortalized as part of the Scooby-Doo lore really takes it to a new level. As a kid growing up, everyone watched Scooby-Doo, and you never think in your wildest dreams that you would be part of it. I had the action figures; I had the Mystery Machine; I had all the toys. And now I’m part of that world. That’s truly amazing.”

“Growing up watching cartoons, especially Scooby-Doo, you always wanted to be part of the story, to be part of that gang – and now I’m in!” Sin Cara said. “I’m going to be watching this movie with my kids, and later with my grandkids, for a long, long time.”

“I’m excited to see myself in a cartoon – I still can’t really believe it’s happening,” Brodus Clay said. “I watched Scooby-Doo after school, before I went out to play, and on Saturday mornings while eating my bowl of cereal. I especially loved when the Harlem Globetrotters were on, and now I’m officially going to be part of that group, so it’s a tremendous honor.”

“Since I’ve been with WWE,” Kane said, “I’ve gotten to do some of the most amazing things – I was in a Super Bowl commercial, I’ve been an action figure, I’ve been in video games and movies. But now to be in an animated movie with Scooby-Doo is absolutely surreal. I mean, who’s not a Scooby-Doo fan?”

The WWE Superstars were also unanimous in choosing a champion when it came to working in the recording booth: Santino Marella. The cast delighted in Santino’s exaggerated antics in the booth, delivering a truly “animated” performance for everyone on both sides of the microphone.

“Working with Santino was so great – he was a blast, and he really made me laugh when we were recording,” said Brodus Clay. “He’s just silly, and we got to be silly together, so that was really fun. Some of the sounds he makes are unbelievable. The man is controlled bliss. He’s unreal.”

“Santino is the most entertaining person I’ve seen anywhere,” Kane said, holding back his own laughter. “He literally acted out the script right before our eyes – even though we were just doing the voices. He was out of control, and that was really fun to watch.

Kane was also very proud of the crossover the film would provide for Scooby-Doo and WWE fans alike.

“What’s really cool about this film is that we’re integrating two pop culture icons,” Kane said. “I’m guessing we’ll create a whole new generation of fans for both – WWE fans getting to experience Scooby-Doo, and Scooby fans getting to meet WWE stars in a whole new arena. That’s fun.”

AJ Lee was particularly thrilled to discover her role in the film included a fun connection with one of her favorite animated characters.

“The most surreal part for me was getting to flirt with Shaggy,” admitted A.J. Lee. “I never thought I’d get a chance to do that, and I always wanted to do it. So that was very cool. Everyone knows I’m super into comic books and anime and cartoons. It’s a huge passion of mine. So to see myself in a cartoon – with Scooby-Doo, flirting with Shaggy – that really is a childhood dream come true.”

While posing for photos by the Mystery Machine alongside Scooby-Doo and WWE Chief Brand Officer Stephanie McMahon, Triple H decided to do a little added publicity stunt of his own – hoisting Scooby-Doo into the air for the benefit of the assembled press corps. The crowd roared and the cameras snapped away.

“Scooby is a little heavier than I imagined, but I couldn’t resist,” Triple H admitted.  “I have an English Mastiff at home that weighs 200 pounds, so I’m used to large dogs. But lifting Scooby – now that was pure fun.”