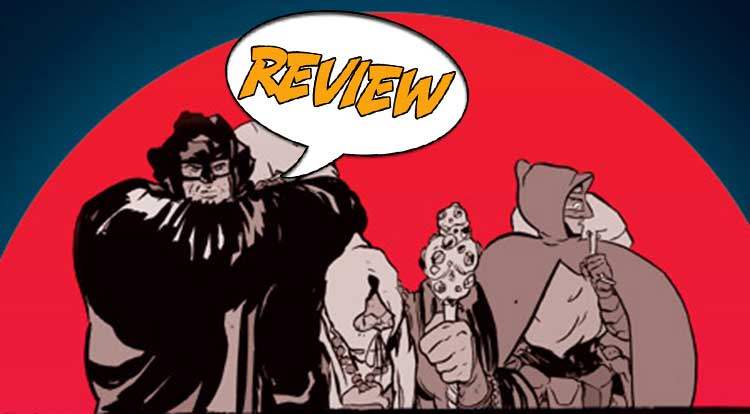 Image Comics makes yet another foray into the world of fantasy with the new series Sovereign. Set in a world that once knew magic and is now seeing its return, Sovereign #1 is an action packed story that’s off to a solid start. Previously in Sovereign: The world of Khend is fraught with danger. The Luminari, who protect the people of the lowlands from spirits, are no longer active outside of their city, Silence. Danger is beginning to return and there is great change on the horizon for everyone.

Sovereign #1 feels a lot like the early parts of the A Song of Ice and Fire series, which I’m not necessarily a fan of. It doesn’t feel remarkably fresh or exciting; though the story it begins setting up does have some elements of interest. The series bills itself as something similar to A Game of Thrones and thus far that appears to be true- with one key exception. The characters don’t grab your attention as quickly. The story opens with Wren, a Luminari member in training, happening upon a group of dead villagers as she and her elders make the journey out into the lowlands. I can tell where the story is supposed to be mysterious, but unfortunately the characterization within this scene mostly comes across as vague. The exception to this is the elderly practitioner, Father Griffon, who has an interesting air of mystery and wisdom about him. As he sips the Lumina tea and watches Wren, you can’t help but wonder what he sees in the world. His acute sense of second “sight” gives the whole scene an eerie feeling that really works.

The characterization seems to improve as the story moves forward and changes scenes to follow Janramir, the young, passionate son of Sanram Rhan, leader of Khend. His characterization is laden with tropes, but also immediately endearing. Despite the ham-fisted foreshadowing, the death of Janramir’s father and its emotional impact is still powerful and brings about a great sense of unease.
The mounting tension continues in the next scene as we meet the pitiable character known as Pol Ravenstone. Ravenstone’s internal monologue is well integrated within the text, creating an unusual kind of close third person narration that really pulls readers in. Although this narration works well for the introduction of new characters, it falls slightly flat during the all-too-brief fight scene that ends the issue’s illustrated section.

Sovereign #1 makes some very heavy handed choices at several points in the story that are unusual for comics; some to better effect than others. The story takes a surprising and probably ill-advised turn at the end, closing on several full pages of written exposition. The last three pages of this issue are a fairly detailed history of the world in which the story takes place and the Luminari. Although this explanation is fascinating, I kept wishing that information had been conveyed to the reader in a different way. Rather than coming across as epic in the traditional sense of the word, it comes across as lazy writing. I can’t help but think that overlaying the text on some art would have helped tremendously.

That is not to say that the story falls flat due to it’s direction consistently. Roberson makes some really good choices, starting with the full-page scenic breaks. They add a lot to the story and really promote the idea that this is an epic fantasy. It helps the issue read more like a storybook.

Roberson and Maybury also have a moment of surprising and subtle genius. As Janramir’s companion warns him of his father’s advancing age, the art seems to move through several different scenes, giving the reader the impression that a great deal of time has passed. As this happens, the dialogue continues normally, which suggests that this conversation his been repeated many, many times. This kind of subtle detail really sells me on Sovereign’s writing and art direction and I look forward to seeing more of it in the future.

Sovereign has potential. There are a few kinks that need to be worked out before it can really be as good as it has the potential to be, but there’s a very solid foundation for a fantastic story. Right now it reads a bit like A Game of Thrones with less satisfying characterization, but Roberson’s writing has good direction, and I have high hopes. If you like fantasy, give this story a shot.