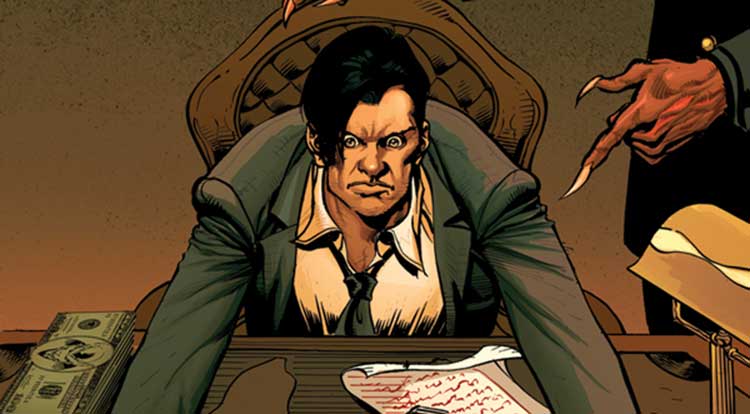 Following up on the best-selling Twilight Zone series by J. Michael Straczynski, Dynamite is releasing a Twilight Zone Annual to be released in 2014! The Twilight Zone Annual 2014 contains three stand-alone tales written by Mark Rahner, drawn by Randy Valiente, Andrea Mutti and Edu Menna, with a cover by Roberto Castro! This squarebound oversized issue will be available in June from Dynamite Entertainment in comic stores and digital.

The Twilight Zone Annual 2014 contains three stand-alone tales of the bizarre: A politician determined to cut aid to the poor finds himself in a Dust Bowl town in the Great Depression. Reality begins to slip away for a crusader against social network “over-sharing.” And a Renaissance player who doesn’t fit in with his present-day peers gets an ugly taste of the real thing.

“The story in this annual ranges from horrifically disturbing to comically whimsical,” says writer Mark Rahner. I hope readers hear Rod Serling’s voice – and a little of his anger – when they read my Twilight Zone annual. I feel like I was born to write this stuff, because I suspect my mom used one of those cone-speaker things to hardwire me with Twilight Zone while I was still in the womb. Instant addict. I wonder if it’s easy for some people to forget how much nerve Serling showed in those shows. He used them as vehicles for blistering commentary – odd, entertaining fantasy, science fiction and horror vehicles. And that kind of nerve inspired me from my first comic book, Rotten, right on through to this one. My Twilight Zone stories are old-school in their approach – you can’t improve on his formulas – to current things that would have given pause to our cigarette-smoking host.” Dynamite was founded in 2004 and is home to several best-selling comic book titles and properties, including The Boys, The Shadow, Vampirella, Warlord of Mars, Bionic Man, A Game of Thrones, and more.  Dynamite owns and controls an extensive library with over 3,000 characters (which includes the Harris Comics and Chaos Comics properties), such as Vampirella, Pantha, Evil Ernie, Smiley the Psychotic Button, Chastity, Purgatori, and Peter Cannon: Thunderbolt.  In addition to their critically-acclaimed titles and bestselling comics, Dynamite works with some of the most high profile creators in comics and entertainment, including Kevin Smith, Alex Ross, Neil Gaiman, Andy Diggle, John Cassaday, Garth Ennis, Jae Lee, Marc Guggenheim, Mike Carey, Jim Krueger, Greg Pak, Brett Matthews, Matt Wagner, Gail Simone, Steve Niles, James Robinson, and a host of up-and-coming new talent.  Dynamite is consistently ranked in the upper tiers of comic book publishers and several of their titles – including Alex Ross and Jim Krueger’s Project Superpowers – have debuted in the Top Ten lists produced by Diamond Comics Distributors. In 2005, Diamond awarded the company a GEM award for Best New Publisher and another GEM in 2006 for Comics Publisher of the Year (under 5%) and again in 2011. The company has also been nominated for and won several industry awards, including the prestigious Harvey and Eisner Awards.
All characters, names, logos, etc. are ™ and © their respective owners.  Press release written by Josh Green.