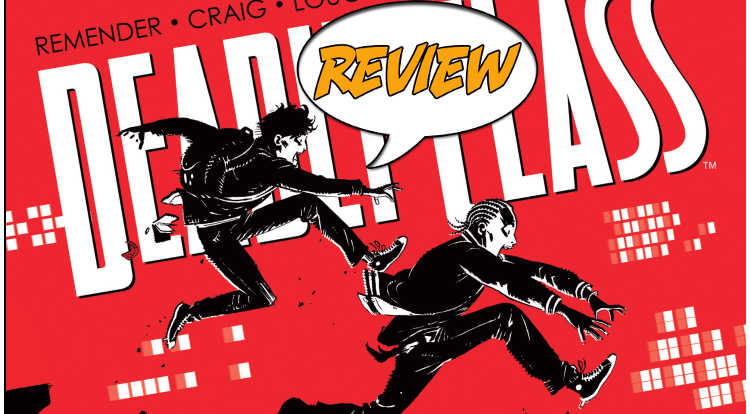 Marcus and Willie are released out into the 1987 San Francisco night on assignment to kill a vagrant and from the near death of one of the young boys the evening goes downhill leaving them to decide whether or not to actually go through with completing their homework.

As we catch up with Marcus and possibly his only friend, Willie, on homework assignment at the beginning of Deadly Class #3 they are hurling themselves from one rooftop several stories above the earth to a second rooftop several stories above the earth. Like fourteen-year-old boys do. Of course the violent act is spurred by the promise of $2.00 to the victor – so  it’s serious business. Marcus makes it safely, remarking in his internal monologue that this is a repeat performance, but Willie very nearly falls to his own demise. It is only through sheer physical strength that Marcus manages to save the life of his classmate. As Willie sums it up: “Shit looks way cooler when Batman does it.”

The boys hop a bus to a, presumably, sketchier neighbourhood of San Francisco and on the way discuss their respective murderer pasts and Marcus’ affinity for the Smiths. Kind of a predictable musical choice for a character training to be an assassin, but I’ll let it pass. Marcus and Willie meet up with one of Marcus’ old contacts from when he was living on the street: Rory. Rory is a homeless Vietnam vet turned drug dealer who points them in the direction of a vagrant Marcus has his eye on for elimination.

When they face the vagrant in question Marcus recognizes him and the pair are thrown off guard. Willie fails to shoot the escaping man, thereby rendering their future at King’s Dominion precarious at best. Defeated, they return to Rory’s camp under the bridge to drown their sorrows in rancid canned food. Realizing he has absolutely nowhere else to go if he flunks out of this school for assassins Marcus beats Rory over the head with a board. This last and violent act secures that he and Willie pass this homework assignment and that he has something like a future.

Rick Remender gives Marcus’ narration the irreverent voice of many fourteen-year-old males, while at the same time amping up the feeling of desperation when Marcus knows he has been cornered and is running out of options. This story is perfect for Remender to be telling and although the school for assassins trope is ripe across the comic book industry, Deadly Class is one of its most interesting incarnations. Deadly Class #3 was the least expositional of the series thus far, though in no way less enjoyable.

Wes Craig populates Deadly Class #3 with reedy characters and urban locale. His teenaged characters are much more lithe than the adults they are sizing up for assassination and nobody looks quite healthy.  The sensibility he brings suits the often sarcastic narrative style while at the same time providing recognizable locale to orient the reader when locations change. The city of San Francisco (even the 1987 version), is instantly identifiable and even the slope of a bridge can let the reader know that Marcus and Willie have wandered into a bad neighbourhood.

Colourist Lee Loughridge highlights the emotional tones of Deadly Class #7 shifting from blues to oranges to yellows to purples depending on Marcus’ moods. Almost everything on panel is in a shade or tone of that main colour and serves as insight into some of the snap decisions made, particularly on the issue’s final panels.

The art and the story appear to be made for each other and I love the way Craig draws the lead character Marcus.

Deadly Class is the cream of the crop of its genre, not too trope-y with fun pop culture references sprinkled throughout. Deadly Class #3 teaches us more things about Marcus’ life, reveals motivation and serves to illustrate just how far he will go to keep himself away from rock bottom.