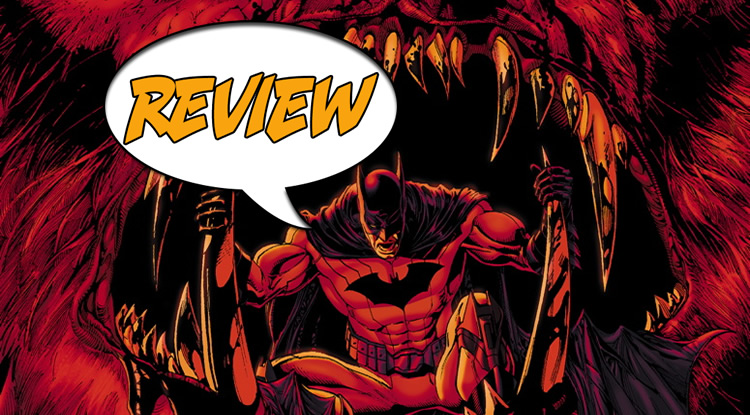 The savagery of Man-Bat reaches a horrifying peak in this final issue of the series!

Previously in BATMAN: THE DARK KNIGHT: “A two-part story details the complex history of Dr. Kirk Langstrom, a.k.a. Man-Bat! How does Man-Bat’s past connect to Batman’s future?”

ANOTHER FOND FAREWELL TO ONE OF THE NEW 52

This is turning into a bad habit. Last week, I bid adieu to the final issue of Animal Man, now this time, one of the Bat-family of books concludes.

It’s not that this comic had smooth sailing from its inception. Writer/artist David Finch began the title about a year or so before the New 52 arrived, which meant the series had to once again start out with a new number one.

It didn’t take long before Mr. Finch got some assistance in the writing department, and things started to gel.

That was until Finch decided he wanted to work on other DC comics, including Justice League of America. DC did bring in great artists, such as Ethan Van Sciver, but somehow all that transition didn’t seem to help.

Thankfully, mystery novelist Gregg Hurwitz was brought in to script the book, and his writing really took off!

Still, I found myself again and again having to point out to fans and comics store owners alike the wonderful stories in the book. If they weren’t reading it, I could see the handwriting on the wall.

WHERE NO BATMAN HAS GONE BEFORE

As a long-time Batman fan, I was particularly impressed with how the family of Bat-titles worked hard to show us things I’d never previously experienced, even with my years of reading stories featuring the Dark Knight.

Hurwitz has done an exceptional job of playing the dark tone of Batman stories off genuinely funny sequences. Given how fans of the Bat don’t often take kindly to humor, I thought he did a spectacular job of not only challenging Batman, but making him as realistic as possible. I mean, NOBODY lives life without ANY humor at all, even the Dark Knight of Gotham City.

My favorite time happened a few issues back, with Commissioner Gordon talking to Batman and expecting him to be gone when he turns around. Instead, Batman was still there, and the two awkwardly stood face to face until they both finally decided they needed to get back to business. I showed that to at least five people, and all of them laughed out loud when they read it.

But that’s not all Hurwitz and the rest of the Bat-clan have been doing. They’ve been putting Batman in situations that he would never have allowed himself to be put in during past stories.

This issue is no exception.

Batman has a cure for the Man-Bat, but how can he get it into the sturdy foe’s body? He can’t inject it because his skin’s too thick.

I was very surprised when I read the solution. There’s NO WAY I’m going to spoil it here. Let’s just say that it made perfect sense, but it was done in a way I never dreamed it would happen.

I’ve read that both Mr. Hurwitz and Mr. Van Sciver, among others who have worked on this title, will be taking on other projects for DC. I continue to have faith in Mr. Hurwitz, who bowled me over with Penguin: Pain and Prejudice a couple of years back, not to mention his run on this book.

And Batman’s not going anywhere. In fact, in a short while, the weekly Batman: Eternal will kick off, and I’m anxious to see how that does.

I continue to fret that Batman will become over-exposed. How many Bat-comics can we as fans buy each month? That this series is coming to an end concerns me since I really enjoyed it’s very dark and yet realistic take on the Dark Knight.

I’m going to miss Batman: The Dark Knight, but I am so glad I read every single issue of it! I’d love to see all the creators who have made this such a memorable title get more chances to work on Batman, so here’s hoping!

Oh, and the final page is truly cool!