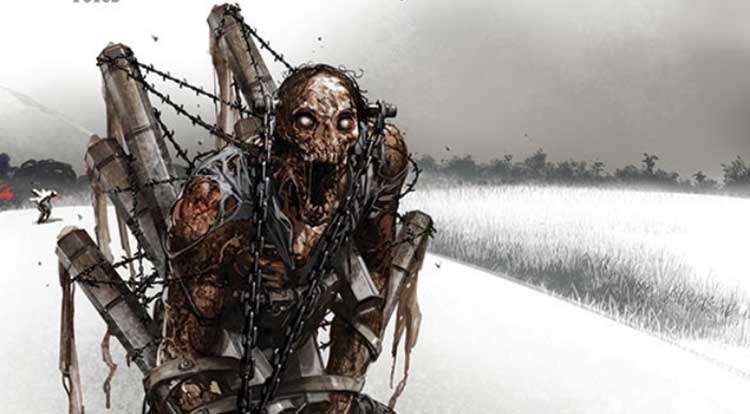 Across the continent on April 2 and April 5, the entire ‘68: RULE OF WAR creative team—Jay Fotos, Nat Jones, Mark Kidwell, Jeff Zornow, and Kyle Charles—will be signing and sketching copies of ‘68: RULE OF WAR #1 in celebration of the book’s official release from Image Comics on April 2. This issue marks the beginning of an all-new story arc in the ongoing ’68 series chronicling the rise of the living dead in Vietnam and the late 1960’s. Fans and aspiring comic artists are encouraged to attend and join the zombie festivities at one of the hosting retail locations.

ARIZONA:
Jay Fotos will be signing books at Samurai Comics on April 2nd from 4 p.m. until closing. Stop by the event with an empty stomach and in the mood to mingle, because there will be a food truck and a special “Drink and Draw” session after the event. On April 5, Fotos will be at Fantasy Comics signing books from 12 to 6 p.m. There will also be a special ‘68 photo opportunity for fans interested in attending.

Don’t miss out on a chance to meet the ‘68: RULE OF WAR creators, watch them create one-of-a-kind comic collectables and participate in some zombie-loving fun. ‘68: RULE OF WAR #1 hits shelves on April 2. Cover A featuring art by Nat Jones can be ordered with Diamond Code FEB140498. Cover B with art by Clayton Crain can be ordered with Diamond Code FEB140499. The blank sketch variant—perfect if you’re attending one of these events—is available to order with Diamond Code FEB140500.
ABOUT IMAGE COMICS
Image Comics is a comic book and graphic novel publisher founded in 1992 by a collective of best-selling artists. Image has since gone on to become one of the largest comics publishers in the United States. Image currently has five partners: Robert Kirkman, Erik Larsen, Todd McFarlane, Marc Silvestri and Jim Valentino. It consists of five major houses: Todd McFarlane Productions, Top Cow Productions, Shadowline, Skybound and Image Central. Image publishes comics and graphic novels in nearly every genre, sub-genre, and style imaginable. It offers science fiction, fantasy, romance, horror, crime fiction, historical fiction, humor and more by the finest artists and writers working in the medium today. For more information, visit www.imagecomics.com.