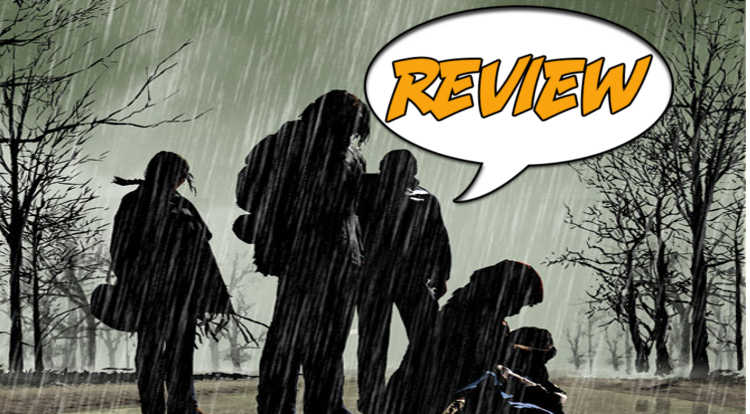 Forever Carlyle interrogates Emma, a fugitive girl who broke in and stole food from her family compound, and for the first time is faced with the way the serf population views her. In the rural lands a teenager named Leigh tends to the horses, feel rejected and might lost her life for it. Greg Rucka writes good comics and Lazarus is a particularly interesting premise that I won’t bore you with recapping. However, at issue 7 we, as readers, are well entrenched in the mystery, but have yet to be thrown anything like a clue. Lazarus #7 is no different and forcuses largely on the B-Plot of a serf family whose land has recently been destroyed and are forced to undertake a great pilgrimage if they are to have any hope of a future.

That being said, the first pages continue the flashback to Forever Carlyle in the middle of her training as a child. Her mentor is harsh and the trials she undertakes are strenuous, even if the reader accepts the reality of what a Lazarus is. However, Marisol (the trainer), is the only shred of familial love we’ve seen in Eve’s life. Although we catch a fleeting glimpse of their relationship it is immediately evident that the only reason Eve turned out to be halfway decent person – unlike every other member of her family – is because of Marisol. The scene is powerful and well crafted and probably the best part of Lazarus #7.

Flash to the present (a.k.a. the ambiguously distant dystopian future), and we see that Emma, who previously aided in a robbery of the Carlyle family’s supplies, now held in a cell and Forever interrogating her. At best, Eve’s interrogation style can be described as bad cop and she receives nothing except glib remarks and derision from Emma. There is no love lost between this off-the-grid girl and the reigning family.

Cut to: transient family. Leigh, a young beautiful girl, is ticked off that everyone else she is travelling with (both her contemporaries and the adults), have paired off and she is left alone with nothing more to do than tend the horses. Whilst accomplishing this task Leigh is startled by what can only be described as a roving troupe of bandits and when she shouts the alarm Leigh is promptly rewarded with a bullet through her body. You can imagine the gun fight that follows.

Greg Rucka has done something very interesting in killing off Leigh. Although she is a recent addition to the Lazarus cast and not a particularly popular character she represents the true innocence as it can be left in this world and she is punished by death for daring to hope for something beyond the ruin of her homestead.  Rucka has given us an emotional stake in his dystopian world in addition to presenting us with the first character death that actually matters.

We get another scene with Emma, Eve and her murderess sister Johanna that has potential to pay off, but adds nothing to this issue’s plot and a startling revelation for Leigh’s yet living family.

The B-Plot of Lazarus #7 is WAY more interesting and moving than the A-Plot with our protagonist heroine. I don’t necessarily think that’s a knock against Greg Rucka, but I do find some irony in the fact that a group of characters whose names I sometimes forget can mean more to me than Forever and her family. However, if Rucka had planted more seeds toward unraveling the mystery of whether or not Eve is, in fact, a member of the Carlyle clan I may have enjoyed that storyline more.

Michael Lark (with Brian Level in some vague capacity), continues presenting the world of Lazarus in a slightly scratchy style that lends itself to the sudden violence that can erupt across a scene at a moment’s notice. From time to time Eve does appear a bit masculine across the shoulders and in the hips, but I’m willing to chalk that up to Lark impressing upon us as readers just how much physical prowess Forever Carlyle carries around on her person on any given day.

Lazarus #7 has the most startling use of colour between the two plots of any issue thus far. Colourist Santi Arcas lends the B-Plot drab Cormac McCarthy-an aesthetic that immediately lets us know just how bad things are in this world for the “serf” and “waste” (Rucka’s lexicon, not mine). In contrast, whenever the story veers back to the Carlyle’s various compounds everything is lit with fluorescents – it feels false, antiseptic, and somehow more dangerous than the great wide somewhere full of gun-toting lunatics.

A BIT OF FILLER

Deeply steeped in its own mythology, Lazarus #7 may not have been the most dynamic issue of the series to date, but will likely make more sense when viewed within the context of the story as a whole. This is an issue better left to the trade.