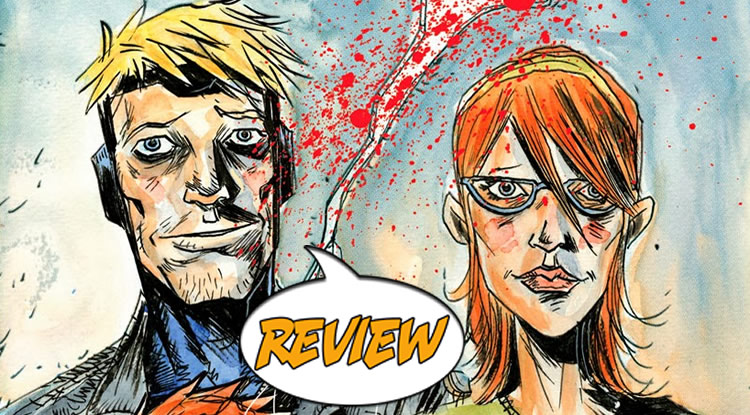 A special finale to Jeff Lemire’s run on the series by the creative team that launched Animal Man in The New 52! What is left of Buddy in the wake of “Evolve or Die?”

Previously in ANIMAL MAN: “Animal Man has marshaled every last bit of power he has to protect his daughter from Brother Blood!”

FAREWELL TO ONE OF THE BEST OF THE NEW 52

I’ve mentioned before that I bought all of DC’s New 52 when they came out a few years back. I read them all carefully, and one of the books that surprised me and others was Animal Man. It also launched Jeff Lemire into being one of the most recognized writers of the time.

One of the things that really stood out was the fact that Buddy Baker’s family was integral to the stories as well as the hero himself. That’s really rare in comics, especially when the trend is away from families and more to single people.

I was also stunned when Buddy’s daughter turned out to be more powerful than even he was. It made sense, but was something I never expected.

Previously, of course, Animal Man became a favorite comic when Grant Morrison was writing it, with that especially memorable panel when Buddy could really see us, the readers, and when he came into reality and talked with Morrison in the last book he was writing.

In my opinion, Lemire has moved the character in yet another direction that will be as classic as Mr. Morrison’s take. I’ll miss this book.

ANIMAL MAN WRAPS UP THE SERIES WITH A TOUCHING FAREWELL

By now, I should know to be ready for an emotional finale when Mr. Lemire is involved. I still pull out the last issue of Sweet Tooth when I’m in the mood for something that hits me in the heart.

This issue of Animal Man is going right next to that book because it touched me in very much the same way. But it did have its own message.

Where Sweet Tooth had to do with the passing of its main character, Animal Man instead focuses on the terrible loss the Bakers endured not very long ago when Cliff died.

Unlike what many comics prefer to do, Cliff hasn’t returned regardless of his sister’s best efforts. This issue is an important one to the entire family (and I include us readers in that group), finally ending the grieving process and moving ahead with their lives.

The issue is divided into two segments: 1) Buddy talking with the representatives of The Red, setting up the future, and 2) Maxine telling a story to her father that helps him understand what she’s finally come to realize.

What’s enjoyable is that Lemire both writes and draws that latter story segment. It has a whimsical feel that is both tender and compassionate at the same time.

NOT IN ANY WAY THE END!

Of course, the news is out that this isn’t the last we’ll see of Buddy Baker and, probably at times, his family. Animal Man will move into Justice League United, which will begin next month.

I’m going to treasure all the Animal Man issues I have, and look forward to see how Buddy works with other superheroes as he continues his adventures.

Given how Lemire often builds on stories of the past, if you have not read Animal Man, I highly recommend that you catch up before JLU comes out, if at all possible. Then, too, don’t miss out on Sweet Tooth, one of the best non-longjohns comics I’ve ever read.

Thanks to everyone involved with this tremendous and classic comic, be it writer, artist (including Steve Pugh) or anything else! It’s been an incredible ride, and I’m thrilled I got a chance to climb on board and go along!