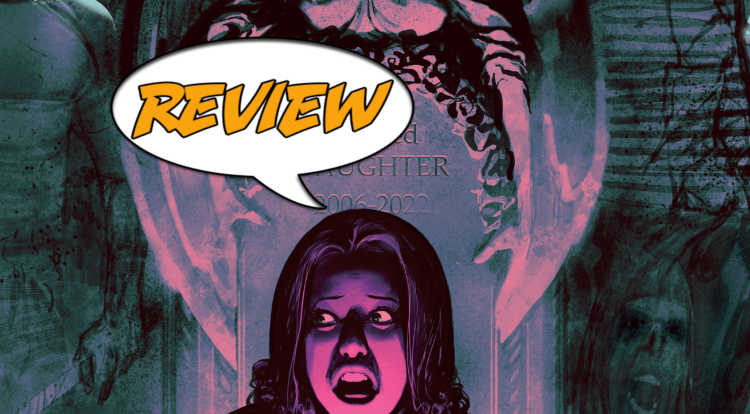 The nearly-dead walk again and not only that, but they trundle off on killing sprees seemingly at random. Everything goes downhill for heroine Beth following a near-deadly prom night and leaves her boyfriend dead with the bodies stacking up even as she struggles to carve out an identity. HAVE WE BEEN HERE BEFORE

On the first page of The Returning #1 we see a teenaged girl strapped down to a hospital bed with the scary mental-patient cuffs. She startles awake, as people are prone to do following days in a coma, and with no explanation forthcoming from nurses or doctors Beth promptly freaks out and needs to be inoculated and we learn that she, in fact, died for a few short minutes just days ago.

Flashback: four days ago. It is prom night and all Beth wants to do is get out of her house, away from her father and brother, and go out with her boyfriend Drew. Drew seems nice and respectable and blonde even as he faces a barrage of questions and concerns from Beth’s father regarding the night’s activity. Throughout the paternal awkwardness Jason Starr reveals to the reader that Beth’s mother is recently deceased and it is a looming fear of her father’s that similar events befall his progeny. With her brother (who I’m pretty sure we never learn the name of?), playing chaperone what could possibly go wrong?

At prom we meet the jealous best friend and Drew’s true nature is revealed as he pressures Beth into leaving their school, breaking curfew and taking off in his car. The boyfriend makes his intentions lewdly evident and when Beth demands to be treated with respect and taken home the misogyny flairs only to be brought to an end by nearly running a frightening looking pedestrian over and barreling into a tree.

Thus begins pages upon pages of exposition as Beth tells us all about her five minutes with the dead, recounts the events that allowed her to leave the hospital and the prejudice she faced when trying to integrate back into quote-unquote “normal” life. Two characters die shortly thereafter (I leave it to you to deduce the remaining two figures most important to Beth), and she decides to leave town with the help of a scary drifter.

Although the living-almost-dead are called Changers, everything about the world Starr is putting on the page is reminiscent of Mike Norton and Tim Steely’s  Revival, albeit executed with less refined hands. The exposition drags and the young female leads speaks more like a grown man than anything else. There’s just nothing surprising or particularly interesting about The Returning #1.

Again, to harp on the Revival comparison, many of the character designs brought to the page by Andrea Mutti are reminiscent of what I’ve seen there. From Beth to the white-spirit representation of supernatural creatures I’ve seen all these things in another book. On top of that, Mutti’s line art looks like it could use another two or three redrafts before it’s really, really good. It feels rushed and underdeveloped and many of the male characters wear the same face.

As far as the colouring of The Returning #1 goes Vladimir Popov sure loves his red. Every time a character dies it is as if all the blood that had once been inside their body sprays over any and all surrounding matter. It is certainly the thing that stands out most about the art and I’m not entirely sure that is a positive thing.

If you like zombie stories that aren’t quite zombie stories and you’re looking for an easy read to fill your comics experience and have exhausted all other avenues then The Returning #1 might be for you. If you are anything other than that there is little of report from this issue and you had might as well pick up something else.