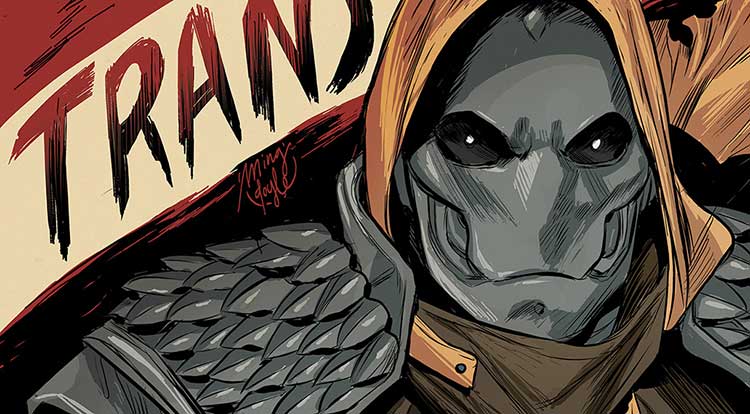 BOOM! Studios breaks down vigilante and villain in ‘Translucid’

Award-winning publisher BOOM! Studios is proud to announce TRANSLUCID #1, debuting this April from the writing team of Claudio Sanchez and Chondra Echert (AMORY WARS, KILL AUDIO), and Daniel Bayliss (The Deal). TRANSLUCID is a startling deconstruction of the classic bond between a hero and his villain, and shows what it takes to push a person to take up either mantle.

“We’ve loved working with Claudio and Chondra here at BOOM! for years with projects like Amory Wars, Key of Z, and Kill Audio,” said Vice President of Publishing and Marketing Filip Sablik. “It’s really fun to watch them plunge into the world of superheroes for the first time with Translucid and new collaborator Daniel Bayliss. As with their other projects, they’re bringing a completely fresh perspective to deconstructing one of the core elements of the genre—the relationship between a hero and his villain.”

WHY WE LOVE IT: Claudio Sanchez and Chondra Echert have given us such BOOM! Studios favorites as KILL AUDIO and KEY OF Z. Their latest book takes the superhero trope of “the neverending battle” and turns it into a completely different beast.

WHY YOU’LL LOVE IT: TRANSLUCID is the superhero story you’ve wanted but never thought you’d see. It explores the thin line between heroes and villains, and the space between childhood hope and loss.

WHAT IT’S ABOUT: The Horse has been the arch-enemy of The Navigator for years. But The Horse feels The Navigator’s moral compass slipping, and even a villain can’t let that happen. The Horse decides to get a closer look into The Navigator’s past that he’s buried deep in his subconscious and find out what drives a person to make the right choice, and what propels someone to make a selfish one. Thus begins an exploration of why a young man would take the mantle of a superhero. TRANSLUCID #1 arrives in comic shops on April 16th with a cover price of $3.99 under Diamond order code FEB141037 with a main cover by Jeff Stokely (SIX-GUN GORILLA, THE REASON FOR DRAGONS) and an incentive cover by Ming Doyle (Mara, ADVENTURE TIME). Not sure where to find your nearest comic retailer? Use comicshoplocator.com or findacomicshop.com to find one! It’s also available for order directly from boom-studios.com.