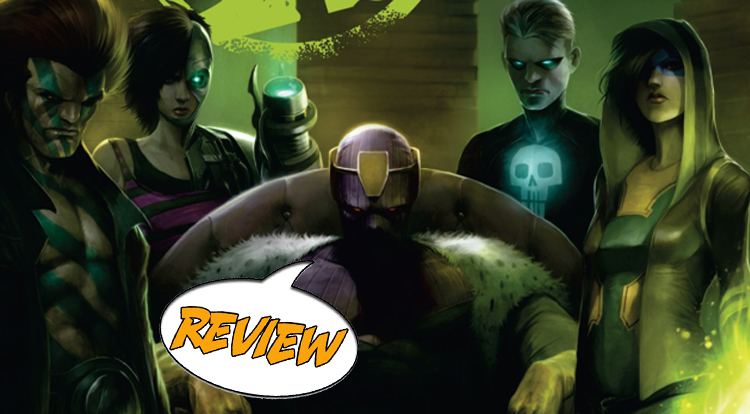 The events of Avengers Arena were off-putting to many fans, but as one of the ones who stuck it through ’til the end, the payoff has potential.  Now, the survivors of the Arena massacre are in an entirely new (but no less dangerous) situation.  Your Major Spoilers review of Avengers Undercover #1 awaits!

Previously in Avengers Undercover: Sixteen teenage heroes, hijacked by the villain Arcade, were forced into a proverbial battle royale, a sort of games-that-might-have-something-to-do-with-hunger, left to their own devices and told that they could only survive by killing their compatriots.  Some submitted to temptation, some died rather than play such a brutal game, but when Arcade streamed the games live over the internet, things got even uglier.  Now the remaining teens (Hazmat from Avengers Academy, former Runaways Chase and Nico, Drax The Destroyer’s ex-partner Cammi, the new Bloodstone, teenage cyborg Deathlocket and axe-crazy Anachronism) have to deal with the fact that not only were they driven to the lowest points in their lives, it became a spectator sport.  Will the consequences cause them all to sink even lower?

When I was 18, I moved out of my mother’s house into a co-ed dormitory in a small city in Kansas.  While we never had to murder anybody (as far as you know), there was much conflict, romance and general mayhem that took place in those halls, and some of the people I met there are among my closest friends and associates even today.  That’s part of why I liked Avengers Arena, in spite of its broad meanstreak and the high body count of characters who might have had potential: It felt like an amplified version of the kind of experiences that many late-teens end up having, experiences that change you forever.  This series picks up a few weeks after where that book left off, with the survivors of Murderworld coming to grips with their status as celebrities, as we see in the very first pages, with Hazmat accidentally overhearing a few callow jerks discussing her “performance” in the “game.”  It’s a pretty ugly moment, made uglier with the revelation that her powers are now finally under her control, and that she’s perfectly willing to use them to prove a point to a jerk.  Since her powers include blasts of high-intensity radiation, this proves odd.  The other survivors are equally affected, with Cammi back at home for the first time in years, dealing with her parental situation, Deathlocket enduring endless experimentation, and Chase making the rounds of the talk-show circuit as a media darling.  The kids are forced to reunite, however, when they discover what young Cullen Bloodstone has gotten up to: Using his late father’s arsenal and resources to hunt down and kill Arcade, the man responsible for their torment.

Hopeless manages to make the issue resonant with parallels to the media-obsessed reality TV society that we live in, but keeps it all subtle enough that I never felt like I was being bludgeoned with the message.  The kids all get nice moments to show off what their PTSD has done to them, and the idea that one of them could become a terrible super-villain is a good one, dating back to the earliest days of Avengers Academy (which makes me think that Hazmat is the odds-on favorite for evilness.)  A new team of Masters Of Evil appear in this issue, with a lineup that I am intrigued by, though I am a bit bugged to have mistaken the villain Hellfire for the quasi-hero Hellstorm, aka the Son Of Satan.  Kev Walker’s art is enjoyable throughout, reminding me why I put as much of the success of the original Marvel Zombies on his shoulders as I do on Bob Kirkman’s, delivering just the right amount of dark and primitive to make the whole story work, while remaining distinct and easy-to-follow, not a simple task.  As the issue comes to a close, I’m a bit irritated to find that I’m going to have to add it to my pull list after all, something that I’ve been on the fence about until now.  As a sequel Avengers Arena, it has the potential to be something bigger, darker and more impressive.

THE BOTTOM LINE: THEY PUT IN THE WORK.

This issue feels to me like a story that Hopeless & Walker really wanted to tell, but knew they had to set up for first.  Many readers hated the journey taken in ‘Arena’, as well as lamenting the deaths of Darkhawk, that Sentinel kid and ol’ what’s-her-name, but had they jumped straight to this point, the backlash would have been even stronger.  As someone who has been knocking around the Marvel Universe since Tigra was the newest Avenger, this story takes risks in the vein of a Steve Gerber or a Chris Claremont, stretching characters past what we know about them to make them into something new and different.  I expect many fans will still be angry about it, but Avengers Undercover #1 is a strong start for an interesting premise, with good art and some great characterization, earning a very impressive 3.5 out of 5 stars overall.  I’m in for at least six issues of a book I hadn’t intended to read, a testament to how good this one reads.