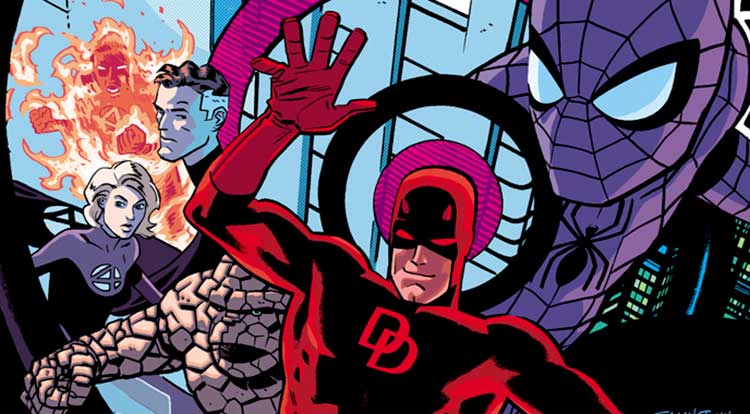 This April, grab 50 fearless years by the horns in DAREDEVIL #1.50, a special anniversary issue brought to you by superstar creators from Hornhead’s past and present – including Mark Waid & Javier Rodriguez, Brian Michael Bendis & Alex Maleev and Karl Kesel!

“We’re celebrating the Man Without Fear’s 50th anniversary not by looking back, but by looking forward,” says Waid. “With a special story set in the future, on Matt Murdock’s 50th birthday, peppered with clues for sharp-eyed readers as to what the rest of 2014 will hold for Daredevil!”

On Matt Murdock’s 50th Birthday – tragedy strikes the city of San Francisco, forcing the Man Without Fear out of his long earned retirement. What will happen to Matt Murdock in the future? Who lives? Who dies? Don’t miss the twists and turns that will have readers buzzing!

What will tomorrow hold for Matt Murdock? And how will this year’s events play into his unexpected future? Can a man truly stay fearless forever? The answers – and even more surprises are coming sooner than you think! Look out – here comes DAREDEVIL #1.50!