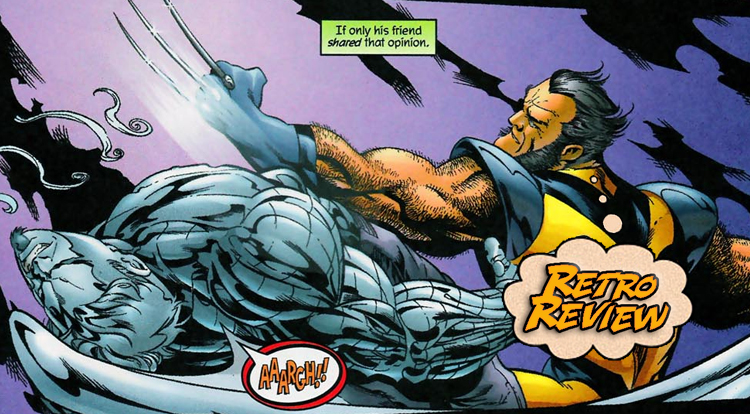 Some issues are memorable to everyone, some only to those who caught it the first time.  Case in point: This one, in which Wolverine is used to his greatest effect, and one of my favorite characters gets the spotlight: This’n is a goody.  Your Major Spoilers (retro) review of Exiles #3 awaits! Previously in Exiles:  Gathered from various realities by a mysterious entity known only as The Timebroker, the heroes known as The Exiles have already lost one of their own in battle.  Each Exile (a Mimic who never lost his powers; a Thunderbird transformed into a horseman of Apocalypse; an alternate Mariko Yashida who has the powers of Sunfire; the daughter of Nightcrawler and The Scarlet Witch; an alternate Changeling called Morph; and Blink from the Age Of Apocalypse) has been told that their universe is dying, and only by working together to save a series of alternate realities can they ever have any chance of returning to their own worlds.  Their latest leap, though, has left all the heroes confused, as they’ve arrived at a moment that several of them recognize as already having happened in their realities, a moment that is key to X-Men history in many realities (including the prime 616 universe that readers are most familiar with.) There are some obvious differences between this reality and the main one (at least some of which have to do with messing up Nightcrawler’s wonderfully iconic Cockrum-era uniform), but team leader The Mimic (who, in this alternate world, has not become a weak-willed never-was, but has become his world’s equivalent of Captain America in respect and status) realizes that the presence of Wolverine is still a problem for them.  The team makes a quick exit, dousing themselves in alien flower juice to hide their scent, before discovering the terrible truth: The Timebroker’s equipment indicates that saving this world will have a price.

To save their worlds, JEAN GREY MUST DIE. Admirably, The Exiles refuse such a dramatic course of action, banding together behind Mimic to search for another way.  That’s when Timebroker’s information device, The Tallus, links their minds together and shows them the future that will be… For any and all complaints about Judd Winick’s writing style, this is an incredibly powerful sequence, one that’s still memorable fifteen years or so down the line.  Having been shown what will happen if they refuse, the assembled mutants have an incredibly difficult decision to make, but it’s a question that really only has one answer. Disguising themselves as alien heroes, the six Exiles offer themselves to Shi’Ar Queen Lilandra to serve alongside her Imperial Guard to fulfill their blood oath, but nearly all of them have a lot of thinking to do.  Nocturne, the daughter of Nightcrawler, is tempted to peek in on her daddy, while Mimic finds himself unable to continue as leader… His logic is sound, as Mimic reminds her that everyone on the team except for Blink herself will probably have emotional ties to the situations and people that they’re encountering, and that her leadership makes perfect sense.  It’s an interesting moment for the team, and one that becomes important as the Exiles adventures continue.  Most impressively, it takes a character who wasn’t very prominent in the regular universe and SHOWS us his awesome rather than just keep telling us how smart he became.  Of course, no comic since about 1984 is allowed to have Wolverine in it without him Wolverining all over the place, and true to form, Logan gets a dramatic entrance… That moment was pretty surprising to me back in the day, and even now, it’s an impressive moment for Calvin Rankin.  While his partners try to figure out how they’re going to murder a friend and comrade, Mimic has to beat the living crap out of his best friend.  My favorite part of this issue, though, is how the fight is accompanied by a quiet narration about Wolverine and Mimic’s friendship… And Winick goes for the headshot, revealing to us the truth of Calvin’s decision:  He’s not just killing his friend, his teammate, he’s killing the woman he’s in love with.  Worse than that, he has to go through his closest friend to get there.  I just love that bit, as someone who has always enjoyed those rare Mimic stories, but I love the way this book makes it clear why he was ever a member of the X-Men to begin with, while Judd twists the knife just a little bit harder… Mike McKone is one of those artists that I really like, dating back to his earliest work in Justice League America at the tail end of the 80s, and his work here is pretty (albeit a bit on the weird side in terms of hair, especially on the female Exiles.)  As the issue comes to an end, we get my very favorite Wolverine panel in the history of ever… It’s tough to take a cliche moment that I usually hate (i.e. the “new character takes down old bad@$$ character to show that he’s the new bad@$$ in town” play) and make it work, but the personal consequences here really sell the defeat of Wolverine for me.  Moreover, ANYONE defeating Wolverine in 2001, after the excesses of the Nineties, was a bit of a thunderbolt moment, and one that helped this book stand out from the many X-Men titles available.  Sadly, Exiles didn’t end well, nor did most of these characters get a fitting exit (something which I have not quite forgiven writer Tony Bedard for, incidentally), but at the beginning of their game, this was a fascinating look into the minds of people we almost-but-not-quite recognized.  The computer coloring is somewhat less successful for me, with some garish yellows and reds and a bit of overshading for my tastes, but nonetheless, Exiles #3 is a very strong issue that led to a long run of cool stuff for the book, earning an impressive 4 out of 5 stars overall.