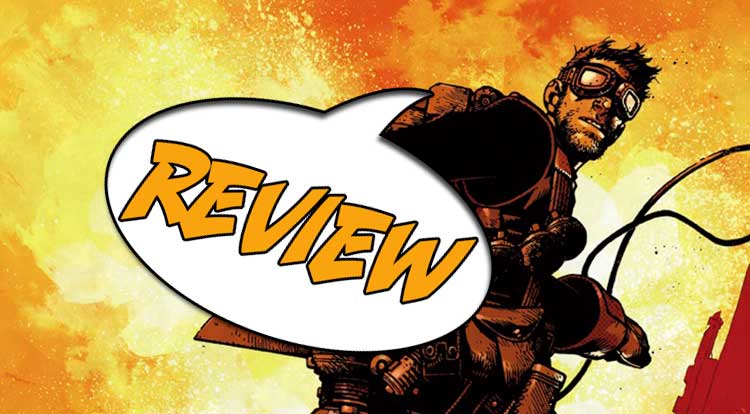 PREVIOUSLY: Time is running out. Desperate to survive, The Dawn is making a run for open sky. However, every path they choose the Judge and his fleet of warships are constantly a step ahead. With war inevitable, will The Dawn be able to prepare in time for the ultimate aerial showdown?!

I went into the initial reading of this book with a limited knowledge of previous issues (I did read a review here on Major Spoilers of issue #2 http://majorspoilers.com/comic-book-reviews/review-wild-blue-yonder-2/) and one eye on the fact that it is #4 of a 5 issue run. That being said, I wasn’t surprised when the story picks up in the middle of an awaiting ambush plotted by the villain character, Judge, of our heroes aboard the airship the Dawn. In a very non-descript setting, shown through art and coloring that is muddy, but in an appropriate and not at all bad way, we are witness to a conversation Judge has with a girl named Sarah, we learn that the Dawn is wanted for its ability to keep to the air without ever having to land or refuel; she calls it a “forever ship” and says she believed it to be a myth. Couple this last thought with Sarah’s barely compliant attitude and we’re lead to believe that she isn’t with Judge of her own volition. Judge tells Sarah he has a spy aboard the Dawn helping him to locate the airship. We also find out that Judge has been recruiting the best humanity has to offer, and I infer from the stand alone issue, while it may not necessarily be implied, that someone has charged him with selecting those who shall board the Dawn, presumably to carry on the human race while everyone below suffers extinction. Judge then confesses to Sarah that he has no intention of being one of these select few and will not board the Dawn himself. I find all of this information an interesting play into the idea that every villain is the hero of his own story. Is it actually so horrendous to want this very special and unique ship for its ability if you intend to use it to possibly preserve the human race? Complicated, God-complex inducing, yes and yes, but it could also be necessary. Also, for this to ship to provide such an exclusive capability in a world where the surface of the earth is literally crumbling and toxic, why is there only one group of “bad guys” or actual bad guys after them?

At this point the story transfers to the Dawn, and we see Cola, our heroine, thinking aloud to her dog, Critter, about how she should handle the fact that the ship’s commander, who is also her mother, is angry with her over a quasi-botched mission in which she is forced to either let her Gun, Tug, die or go against her mother’s orders to save him (she decided on the latter). We then find that Tug has been working to rebuild Big Cola’s plane, we discover who the spy is (spoiler: it’s Tug), and he assures everyone that he was only doing what he believed to be right but has since switched sides and that he will defend the Dawn “no matter what it takes.” He apologizes to Cola again as they board their oddly vintage plane in preparation for battle with Judge and his crew. The last thing we see is a double-page splash as three planes fly off toward both a literal and metaphorical storm.

Okay, maybe that subtitle is a bit of an exaggeration (I just couldn’t pass up the terrible pun), but only a small bit. While I have faith that if I had read the previous 3 issues this one would have been more interesting, on its own this issue presented no new or interesting ideas. It was heavily padded with tropes that are growing a bit old. Oh, you romantically fell for your partner? There’s a spy among us? No one understands you or why you behave like such a lone wolf? I’m over it. However, there were good things about the book as well, particularly the art. I was absolutely stoked to see a female lead that isn’t overly sexualized but isn’t pushed too far in the other direction either. The dark coloring is very fitting for the post-apocalyptic backdrop, and while certain aspects of the way the characters are drawn are a little wonky, they are consistently so. I specifically noticed and appreciated that Cola is drawn as realistically balanced combination of Olivia and Big Cola. My favorite panel comes just after Tug is discovered and has promptly been beaten. The bottom middle panel on page 14 shows him brimming with tears and dripping blood that defies gravity and it just stuck with me.
Bottom Line  Based on this single issue alone, I can’t recommend that you drop everything to run and buy this book, but at the same time I’m not upset about having purchased it, either. It is a pretty middle of the road book with art good enough to bump my score to 3.5/5 stars.