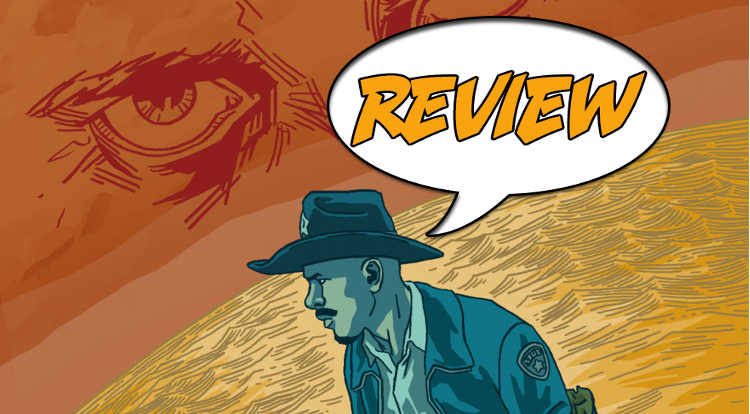 WHO WITH THE WHAT NOW

Meet Shane. Shane is the Sheriff of Carpenter’s Cove. Shane is also the de facto leader of this sleepy little town. Shane employs justice swiftly and when we meet him he is exiling a townswoman for having committed murder.

Max lives in a different world than Shane. Max is running from some very dangerous people. The kind of people who go about in suits and vans. When Max does things (i.e. pressing mysterious buttons), they affect the world of Carpenter’s Cove in a big bad way. For example: THWASH! Demon monkeys and dragons descend and forcing Shane to take to his hove bike in retaliation.

Headspace #1 is told almost entirely through internal dialogue, but in the scenes featuring Shane, in particular, writer Ryan K. Lindsay suffers from telling rather than showing. I’m willing to let it slip and not lambaste him as being amateurish because this is a first issue, but I dearly hope this storytelling tick is speedily dropped. Headspace #1 is too good and it deserves better.

Shane runs from the terrors attacking Carpenter’s Cove. He runs from his past and his swirling memories. He runs all the way into a basement bar. The bar is tended by an anthropomorphized android dog evidently programmed to dispense advice.

Back in Max-land he does away with his suited-pursuers in a very James Bond-esque fashion and hops himself a boat to the big city where clues to the next step he is to take swirl about him. It is up to Max to see them.

The dog-tender and Shane, meanwhile, are in the middle of a cryptic conversation and the crux of the entire issue is revealed. If you haven’t figured it out by this point: Shane is living in the Carpenter’s Cove inside Max’s head! Just then, Max himself (or a projection thereof), appears to put an end to Shane. To forget him. An action sequence ensues and the last thing Shane sees is an image of his own young son who died some years previous.

While the conceit of Headspace #1 is apparent from the very title of the issue, I enjoyed the reveal. Except for a few notable moments of tell vs show I think Lindsay has set up a massively interesting world that examines the relationship between cause and effect. His two leading men are interesting, likable and even though this first issue is remiss in its lack of female representation, they are enough for me to want to come back and see what will happen next.

The two unique worlds represented in Headspace #1 are handled by two different artists entirely (Christopher Peterson and Eric Zawadzki), in a brilliant move. Their styles are different: Peterson’s lines are organic and clean whereas Zawadzki brings a much sketchier, pointier sensibility to the page and they each serve their respective reality.

The soft, clean-looking design from Christopher Peterson builds up the world of Carpenter’s Cove that Shane inhabits. It betrays the reader into believing that this place exists in the real world and is populated by creatures and concepts we are familiar with.

Eric Zawadzki handles Max’s world (presumably the one we reader inhabit), and makes everything sharp and unsafe. His style does a great job at reminding us that Max is in present danger and nothing for him is security. It is very nearly understandable that the actions he undertakes would spill over as violent imagery filling the negative space between his ears.

Monkeybrain Comics consistently produces quality comic books that tell compelling stories and are lovingly illustrated. Headspace #1 is both. It’s a science fiction-y story with two protagonists involved in two separate, but no less interesting, storylines intersecting in unexpected ways. Absolutely pick up Headspace #1. At $0.99 it is nothing short of a steal.