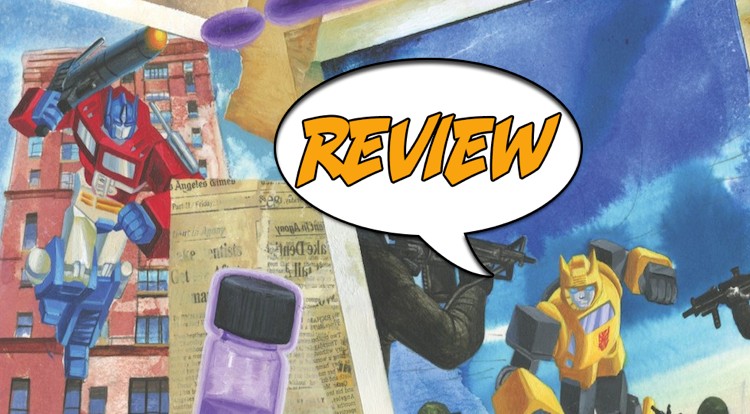 Previously in The X-Files: Conspiracy: The Lone Gunmen have been investigating various urban legends in an attempt to stop a lethal virus outbreak.  So far they’ve met the Ghostbusters and the Teenage Mutant Ninja Turtles.  Their next lead is to investigate strange robots who change shapes.

The idea of a crossover between The X-Files and Transformers seemed completely ridiculous to me.  I love both properties but could not see the two merging smoothly.  Still, I had to check this out due to my huge love of Transformers.  I tried to maintain a positive mental attitude before reading because you should never judge something before experiencing it.  My positive outlook was only able to go so far and I can say that while it’s not a horrible comic, it’s not a particularly good one either.

The concept and way the story has merged these properties is clever.  Presenting the Ghostbusters, TMNT and Transformers as urban legends works in giving a reason for The Lone Gunmen to meet with them.  This book is basically a rescue mission as The Lone Gunmen help Optimus Prime and Bumblebee rescue Ratchet from Skylogic Systems.  Paul Crilley does a good job crafting a brisk story with some fun elements but the majority doesn’t work.  All personalities are well written and Bumblebee becoming friends with Langly felt right.  I was disturbed by Bumblebee’s willingness to gun down Skylogic’s security, blowing many to pieces.  Apparently preservation of human life doesn’t apply to security guards.  Most of the jokes fall flat and the story isn’t as exciting as it wishes to be.  By the end the Lone Gunmen get another address to go to, something they could have gotten themselves.  I would have much rather read a story with them alone than teaming up with the Transformers, but I guess that would defeat the purpose.  I haven’t read the previous issues, but if they’re anything like this then it’s just an excuse to merge properties into a story better told only with The Lone Gunmen.

Dheeraj Verma does a great job with the characters and all are recognizable.  His Transformers have a practical appearance, making them mesh well with the X-Files world.  The storytelling and panel layouts are the biggest hindrance to the issue.  Scenes with the Gunmen and Transformers talking have large panels while most of the action feels cramped.  This is most evident where Ratchet catches the Gunmen while falling out of a building, transforming midair, driving down part of the building and landing safely.  What could have been an excellent moment ends up being confusing due to slender panels sharing space with smaller ones.  The transformations look awkward, almost as if their pieces are blown apart and magically put back together.  Joana Lafuente’s coloring looks great and gives it the X-Files feel, i.e., most light source coming from a flashlight of some sort.  Overall it looks good but the storytelling makes much of the issue confusing and cumbersome.

BOTTOM LINE: ONLY FOR THOSE INVESTED

After hearing Matthew’s positive review of the TMNT issue, I held out hope for something fun.  Though I like both properties, The X-Files: Conspiracy: Transformers just doesn’t work for me.  None of it is particularly interesting or exciting and I would much rather read a story with The Lone Gunmen themselves.  The art looks good but the layouts make for a confusing reading experience.  Those who’ve read this far will probably continue on but I have no interest in checking out previous or future issues.