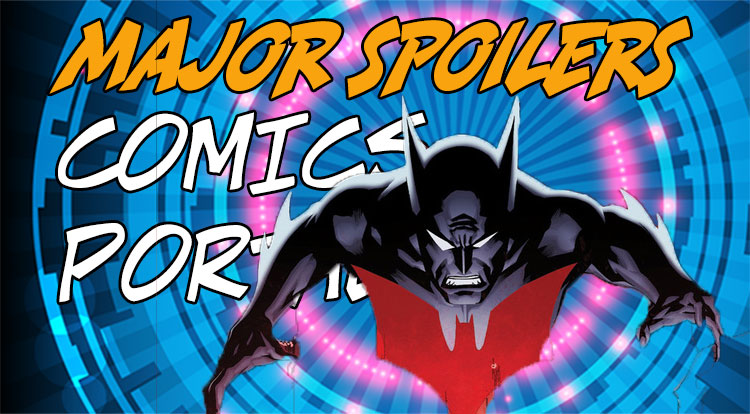 Several months ago, I discussed the debut of Batman Eternal, which will begin next month, in April.

Now comes word that DC will also have two other weeklies hitting the stores by October. Not only that, September will be another special month, with peeks into possible futures of many DC characters. We’ll see what could be happening to them five years from now.

WEEKLY COMICS ARE A “CHALLENGE”

The three series will be the previously mentioned Batman Eternal, Futures End (the possible futures weekly, starting in May) and an unnamed book launching in October.

I said previously that DC made wonderful comics when they went with 52 and its subsequent weekly books, including Wednesday Comics. I didn’t care about the format – I loved having something “super” to look forward to each week.

Are they tough to make? Of course! The deadlines are always looming, and in the past, they found they sometimes had to overnight things to the press to get the book to the stores on time each week.

Was it worth all that effort? Definitely, I think! I met new creators, read interesting new takes on DC characters, and got to see the spotlight shine on several “minor” heroes.

When talking about these upcoming books, Co-Publisher Dan DiDio called them a “challenge,” stating that “it is a major commitment, and a lot of coordination to get it right, but one of the things we felt very strongly about is that sense of momentum and excitement.”

Personally, I believe that weeklies benefit both local comics shops and sources of digital books. If you get hooked into a weekly, you’re going to want to keep up, and that means the possibility of finding other comics you might want to sample or catch up on. It’s a win for everybody, in my opinion.

Last fall, the “Villains” month issues sold “like crazy,” to use the technical term. DC’s made a habit of this, with the New 52’s launch taking place in September, followed by Zero issues (about character origins), then the ninth month being dedicated to the baddies of the DCU.

It’s not a surprise that the 3D motion covers are coming back, as well as a theme to help make the month’s product appealing. I remember the scramble last year to get the Joker’s Daughter issue last September when the 3D motion cover version was hard to get. Everyone was asking other fans to see if they had one, and if they did, would they part with it. Yikes!

An important thing to note is that the event is called Futures End, not Future’s End. That apostrophe makes a big difference! Instead of dealing with one future, there will be many possible futures presented. Personally, I’m intrigued by looking into several potential futures, so I’ll be there. The trick is that both the weekly and the September event currently have pretty much the same name, so keeping track of what belongs where may be something to be careful about.

Every event, much like many TV shows, loses steam as they progress. Folks try it out, then lose interest after a while. The New 52 was a huge event when it started, but as books are being cancelled and creators move on to other gigs, it’s tough to keep people buying your product.

DC has made great strides in leveling the playing field with Marvel. However, they haven’t reached the level they want to yet, and that means generating more reader interest. Events do that.

As I mentioned last week, number one’s go a long way toward getting noticed. Events also do that.

My biggest concern is that, as I mentioned before, events usually start big, then often lose steam as they progress. If a fan is going to buy a book each week, that’s a big investment of money and time. It’s got to not only draw readers in, it’s got to keep their attention. And THAT is also a big challenge.

Having THREE weeklies going on at the same time will be something to observe, if not buy. In the past, DC has usually had only one coming out at a time, like Wednesday Comics. The pressure will be on DC this year, and I will dive into each with high hopes.

Of the three weeklies, Batman Eternal grabs me the most, given that many of the Bat-creators making the Dark Knight fly high currently will be involved. But that doesn’t mean I’m not interested in the others. The proof will be in the reading!

Regarding September, I think that DC’s making a good move by keeping this tradition going. I honestly didn’t think the “Villains” event would be a big deal, but was I ever wrong, as sales figures pointed out!

The entire comics industry is working hard to survive and even thrive in an age of iPhones, iPads and iPods. They survived video games, but can they make it through the digital era? Stay tuned as we find out together!