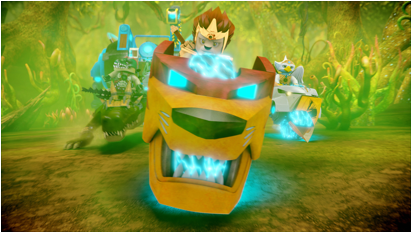 Laval, Cragger and the Tribes are back with new episodes of Legends of Chima on Saturday, March 15 at 9:30 a.m. (ET/PT) on Cartoon Network. The next chapter of Legends of Chima begins with Chima in crisis. The CHI-filled waters of Mount Cavora have stopped flowing, depriving the Tribes of their main energy source. All of nature is out of a balance. And a mysterious Black Cloud from the Outlands continues to threaten the land. But there is good news, the Tribes have agreed to put aside their differences and work together to save Chima. They have formed a “team of heroes,” consisting of the most prominent youths from each of the eight main Tribes. Laval, Cragger and the rest of the Tribes will attempt rescue missions of truly epic proportions.

In the premiere episode, “Into the Outlands,” the heroes learn the disturbing truth about the stolen CHI and the missing Legend Beasts. They must battle both the savage carnivorous Outland plants and the mysterious Black Cloud. Their only escape route takes them through a gauntlet of mazes and traps, leading them to an unlikely ally.

Legends of Chima is based on the popular line of LEGO construction toys comes and tells the story of the Chima Kingdom, a magical land ruled by very advanced animal tribes. These creatures walk and talk like humans. They drive vehicles, use machinery and live in amazing castles and fortresses, but still have claws, teeth, tails and wings. The Chima Kingdom that was once a pure and natural paradise has transformed into a land of unrest. Only a few brave heroes understand the true nature of Chi. Their story, and the stories of those who challenge them, are known as the “Legends of Chima.”