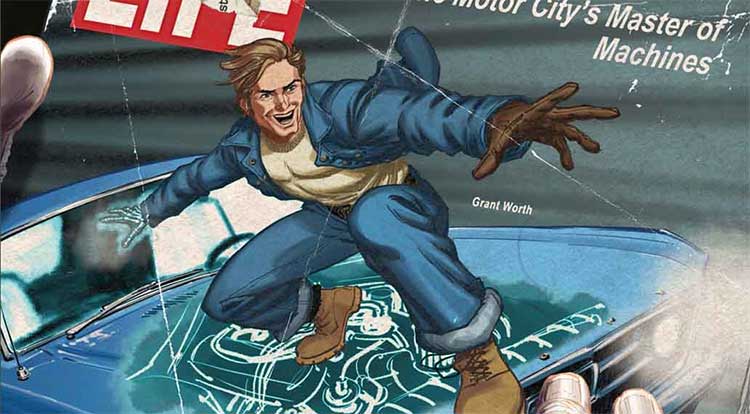 Roddenberry Entertainment releases Worth as graphic novel in April

Building on its critically-acclaimed comic book series, Days Missing, Roddenberry Entertainment releases its next highly-anticipated graphic novel, WORTH, published by Arcana Studio. Launching as a 128-page, full-color hardcover book on April 2, WORTH will also be digitally unveiled one chapter at a time throughout the month prior. The story of a super-human whose ability is rendered obsolete by the evolution of society’s technology, WORTH is writtenby Aubrey Sitterson and illustrated by Chris Moreno.

WORTH is the dynamic story of Grant Worth, Motor City’s most iconic hero. During the 1960s, his mechanopathy (the power to control machines, from cars to guns) made him a legend in Detroit, bringing him fame, adulation and prosperity through early adulthood. However, in the late 20th century technology evolved by leaps and bounds with the advent of computer chips, motherboards and microprocessors. Unable to break through the maze of 1s and 0s that became the gateway to most machinery, Worth found his unique ability becoming obsolete. Grant Worth went from super-hero to somewhat-normal. WORTH traces the heartfelt quest for redemption of a super-hero who is no longer so super. Limited print copies of the first chapter were made available to attendees at 2013 Comic-Con International: San Diego. WORTH will be released as follows, with digital downloads available via Comixology.com. As a gift to fans, the first chapter will be free. Additional digital chapters will be priced at $1.99 each and the full digital book will be $9.99. The printed novel is now available for pre-sale online via Amazon and Barnes & Noble. More details available at WheresYourWorth.com.

ABOUT ARCANA STUDIO
Arcana Studio, Inc. owns one of the world’s largest libraries of graphic novels and comics, with over 200 original intellectual properties, 300 graphic novels, thousands of comic issues and an ever-growing character list. Arcana has begun to adapt this library into live action feature films, animated features and episodic television series. Taking a transmedia approach to brand building and the development of intellectual properties, Arcana publishes graphic novels for North America in print, and now digitally as well. Arcana has been published and distributed in dozens different countries and translated into just as many languages across the globe. For more information, please visit www.arcana.com. Arcana Studio can also be found on can also be found on Facebook (facebook.com/arcanastudio) and Twitter (twitter.com/arcanastudio).