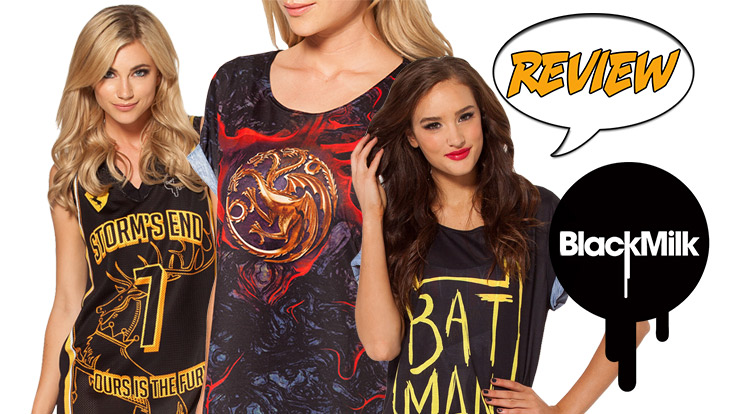 Let’s take a look at what Black Milk is doing with their latest licensed properties, Batman and A Song of Ice and Fire.

I’m going to assume, dear readers, that you’re uninitiated into the world of Black Milk, so I’m going to take this by the numbers.

Black Milk is an Australia-based printed nylon shop, with leggings, skirts, dresses, bodysuits, bathing suits, and tops. They do all their own design/printing so it’s usually unique items and with good quality. Since starting their site, the Aussie clothier has gained a massive following. Their fans call themselves “Sharkies” and are appropriately ravenous for the designs. Black Milk has an extremely strong female community, formidable enough to leverage the brand into expanding their sizes to include XL and XXS in the last year. Black Milk has also proved formidable in their ability to land choice licenses such as Harry Potter, Star Wars, Gremlins, and The Lord of the Rings. And due to their strong, collecting fanbase, many designs sell out within minutes.

Unfortunately, even though I love Batman and Black Milk, the first wave was nothing to write home about. I was disappointed with the images they chose to print, the same sorts of things I expect on a licensed shirt at a convention. The most interesting pieces to me are this shirt and these bodysuits (n.b.: the Bad Kitty Bodysuits had technical problems and were pushed back to next release). As you can see, they reference comics without hitting you over the head with it. And while I like the “battlesuit”, it’s a piece that looks like it’d be really useful for cosplay but maybe not for regular wear, (that’s why I decided against it). However, I wasn’t impressed with them just taking black and white striped items and throwing them in there under the “henchman” label, seems lazy. Same with the velvet pieces that are somehow supposed to evoke “villainess”. No, you just wanted to make some stuff out of velvet. I want subtlety. We have enough shirts that are “image taken directly from a comic”. There were lots of “creepy” and “dark” and “Joker” themed items that made the whole line swing into the Halloween category. I wanted more wearable things and I expect more from Black Milk. The best pieces hands down are the Bad Kitty bodysuits for creativity and use of the tie-in, but they’re not available until next release. Hopefully, the next waves of things from their DC partnership will be better.

The Upcoming Game of Thrones Release

The Song of Ice and Fire series is an impressive acquisition for the company and the March 10th release is going to be a pretty big deal. Here’s a run down of what they’ve previewed so far. A new print exclusively designed by Black Milk. This “Dragon Egg” print will be on skater dresses, bathing suits, and (of course) leggings. The design is based on two of Daenerys’ dragon eggs, red for Drogon, green for Rhaegal, and….no third one! Why? According to their Facebook page: “We’re doing Rhaegal and Drogon, not Viserion since he’s cream/gold and when we put it on the garments it made it look like you had dirty legs/crotch and we thought we’d spare everyone from that!” The leggings are marked as “HWMF” which is Black Milk’s abbreviation for “High-Waisted, Matte Finish”. High waists are good news for us that need the extra tummy control.

Am I crazy about it? Maybe not. It’s a matte finish and there for not shiny. But I think if you’re a collector, these are the ones you’re going to want from this release as they’re the most striking looking and also very “Black Milk”.

I’m not feeling the themed basketball jerseys but at least they’re not boring. And I like that there’s a range of style shown here to appeal to different buyers. Ones that go outside and throw basketballs in the goal hoop. Nope. I don’t want to wear anything that looks like a little kid’s bedsheet. This looks like the usual fare of licensed stuff, not interested. It’s a better cut than the stuff made by SuperHeroStuff, but for the price I want a way better look on a shirt.

But, still, I want to encourage a wider variety of fashion options for the discerning fan and Black Milk is adding a lot of variety to the closets of this desperate, fashion-savvy nerd. What do you think of the line up? Any other clothing brands “doing it right” for the geeky chic world?