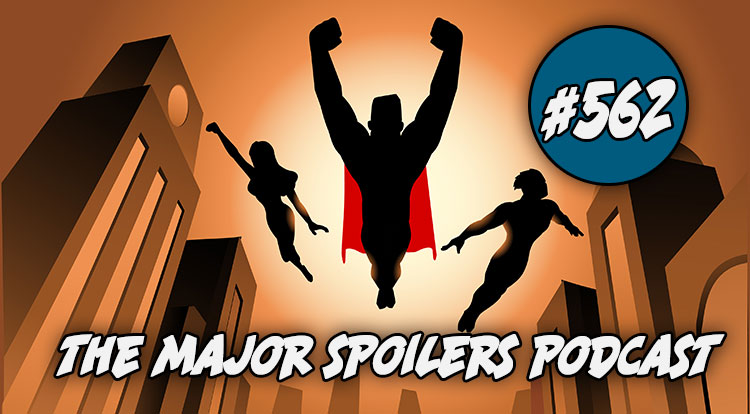 Major Spoilers Podcast #562: The Mask of the Red Panda

This week on the Major Spoilers Podcast, It’s The Red Panda! Plus, The Veil, Pariah, The X-Files, Teenage Mutant Ninja Turtles, Myth, Spider-Man, Darth Vader, Rodrigo, Zach, and The Rest!

Thanks to Shades of Vengeance for sponsoring this episode, check out their Era: The Consortium Kickstarter Tabletop RPG campaign.

REVIEWS
STEPHEN
Aron Warner’s Pariah, Vol. 2 #1
Writer: Aron Warner, Philip Gelatt
Artist: Brett Weldele
Publisher: Dark Horse Comics
When the Vitros find themselves imprisoned in an abandoned and outdated space station, any hope of them truly uniting seems lost. But when it becomes clear that the station has been rigged for destruction by some unknown foe, the Vitros must toss aside their difference and face an ever escalating series of challenges and choices if they hope to survive. From the producer on Dreamworks’ Shrek films!

MATTHEW
The X-Files: Conspiracy – TMNT #1
Writer: Ed Brisson
Artist: Michael Walsh
Publisher: IDW Publishing
The Turtles are doing their best to avoid trouble in Northampton. Unfortunately, trouble finds them in the form of the Lone Gunmen! The fate of the world depends on the Gunmen getting the reclusive Turtles’ help. Add in an undead menace and things are going to get downright dangerous!

RODRIGO
Veil #1
Writer: Greg Rucka
Artist: Toni Fejzula
Publisher: Dark Horse Comics
A beautiful girl wakes up in an abandoned subway station with no memory of how she got there. When men try to hurt her . . . they wind up dead. Where did she come from? And what is she capable of?

ZACH
Myth #3
Writer: Mike Loniewski
Artist: Dan Lauer
Publisher Alterna Comics
Cover Price: $2.99
DOUBLE-SIZED issue of MYTHic proportions! The secrets of the forest are revealed in the exciting conclusion to Myth. With ancient evil poised to strike, Sam finds himself in the clutches of the Ogre Guard. Meanwhile, Ann and Giant plot his rescue with a fallen warrior of old. But can they reach Sam before he’s sacrificed to the Witch Queen’s tomb?

I’ve been wondering something for quite a some time, and I thought your expertise could help me out. Who would win in a fight? Spider-man or Darth Vader? I really can’t figure this one out. I’ll leave any details to you fellas.

Now, I have my answer, but instead of letting us tell Eddie how the fight would fall out, we’re letting you get in on this battle of Disney owned properties.