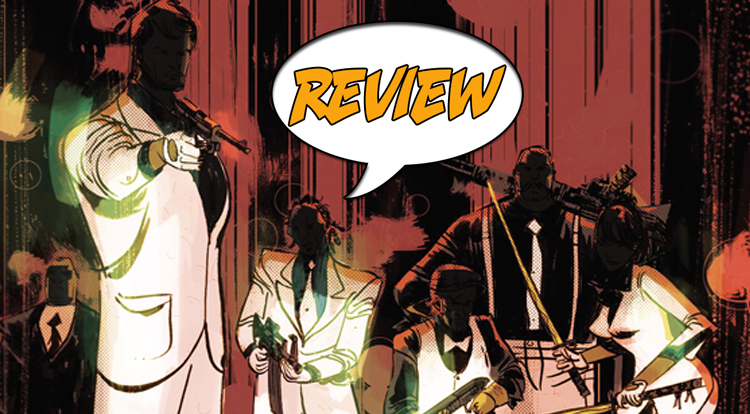 “Mysterious killers dressed in white, they savaged the Cold War Soviet underworld… then disappeared.”  The question still remains, even years later: Who were The White Suits?  Your Major Spoilers review of The White Suits #1 awaits! Previously in The White Suits: “Mysterious killers dressed in white, they savaged the Cold War Russian underworld—then disappeared. Now they have resurfaced in New York, leaving a trail of dead mobsters. In this bloody wake, an amnesiac and an FBI agent search for the answer to a single question: Who are the White Suits?”  It’s a question on the minds of many, but it weighs on few as hard as the amnesiac known as Prizrak, a man who doesn’t even have a clear idea who he himself is, much less the status of a murderous urban legend.  But that’s all about to change…

A MYSTERY WRAPPED IN WHITE LINEN

Any good crime noir starts with a first-person narrative, and so it is here, as Prizrak discusses the nature of memory to open this issue.  It’s a little bit off-putting at first, but in a fascinating, lyrical way, as he dissects a tiny bit of memory, pulling it apart to realize that one of the few things he knows about himself is that he used to be a bad person, a killer of some sort.  He dreams of The White Suits, brothers in arms, each as deadly as the last.  The art is all over the place, reminding me of some of the wilder animation style of the late 1960s, a Peter Max-by-way-of-Peter Chung psychedelic landscape.  Though he has no memory, Prizrak is still on his game enough to realize that he’s being trailed by a strange young woman, and vows to find out what it is she wants.  In the middle of the issue, though, we go off to find the White Suits themselves, busting in on a group of petty criminals and ripping them (literally) to pieces.  We see the Suits in action, though nobody identifies themself or each other, leading to a moment where we find out that the action sequence is itself nothing more than a videotape, a transition that leads to an equally frenetic meeting of criminal minds.  The story is intriguing, and makes me want to figure it out, then leaps and spins about as if trying to shake me, deepening the strange love/hate relationship with the audience.

Everything in this book is visually striking, especially the various color palettes, and the fact that the titular White Suits are generally drawn as negative space in black voids or blotches of color.  Their body structures are geometric and angular, a very impressionistic (and impressive) way to give them character and make us fear what they may do next.  We return to Prizrak, who confronts the woman tailing him, only to realize too late that she’s playing him.  She quickly kicks his @$$, knocking him out and dragging him to her apartment where she tells him that they have a mutual enemy.  Though his memory is gone, he has information that she needs, and in return she can tell him what he wants to know:  Who he is!  There’s a lot of violence in this issue, including a man getting his hands chopped off with a katana on panel, with repeated shots of his severed limbs lying on the carpet.  The non-representational art style actually helps to mute the graphic violence, but there is still an air of menace and the threat of impending violence is implicit throughout the issue.

All in all, it’s hard to judge the quality of the story from what we get in this issue (though this is #1, the introduction to the team took place in previous issues of Dark Horse Presents), I’m still interested by whatever it is that’s going on with The White Suits.  There’s a hint of historical context, a bit of the old ultra-violence, and some interesting art in play, but I can’t help but find elements of the story a bit familiar, reminding me of ‘100 Bullets’ and the various similar titles that popped up around the year 2000, but it’s not something that torpedoes the story.  I’ve read this one three times now, and I’m intrigued by it, but still unsure of whether I need to come back next issue for more.  The White Suits #1 is fascinating to look at, but a little bit scattered in its execution, but still solid enough to earn a very respectable 3.5 out of 5 stars overall…