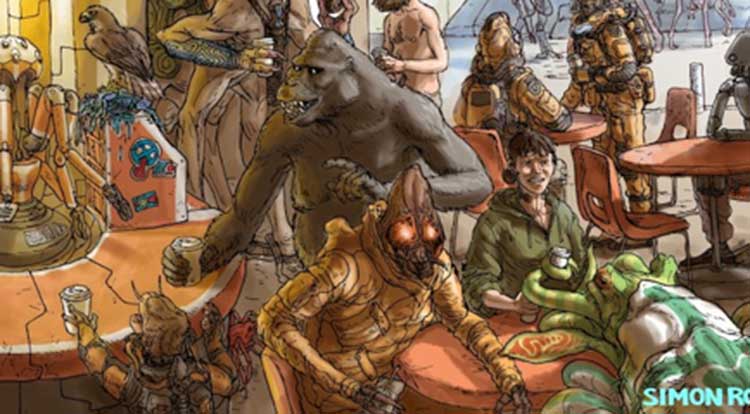 Many comics readers have been introduced to Simon Roy’s expansive imagination in PROPHET, the epic science fiction series that he writes and draws with Brandon Graham. But his deft hand with futuristic alien worlds was first on display in his short stories, seven of which are now being collected by Image Comics in JAN’S ATOMIC HEART AND OTHER STORIES.

As with so much of Roy’s work, the title story in this collection deposits the reader in a fully-formed world while allowing them to see just a tantalizing slice of life in it. Jan is waiting for a new body after his previous body was destroyed in a car accident, and he’s none too pleased with the outdated robot “loaner” he’s using in the meantime—even before he begins to suspect it played a role in a Lunar terrorist attack.

In every story, Roy brings familiar attitudes to strange settings, whether it is in the banal brutality of imperialism, the unpredictable bond of friendship, or the everyday concerns that exist even in the most alien of places. The tone ranges from grim to poignant and even humorous—even within a single story.

Roy’s tendency to juxtapose the quotidian with the alien and to find perspectives at odds with each other may have its roots in his time studying in Ukraine, the “old world” as he called it in an interview with Multiversity Comics, “where you can see the history of the place with every step you take, where all of the history is coexisting at once…. [Y]ou had all this interesting tension between the different ages of this country all coexisting in a very interesting way.”

JAN’S ATOMIC HEART collects seven stories, some of them never before published: “The Cosmonauts,” “Jan’s Atomic Heart,” “Good Business,” “Shipwrecked with Dan the Gorilla,” “Bar Fight,” “Homeward Bound,” and “Hunter Killer.” It will be in comic book stores on March 26, in bookstores on April 8, and is available for preorder now.