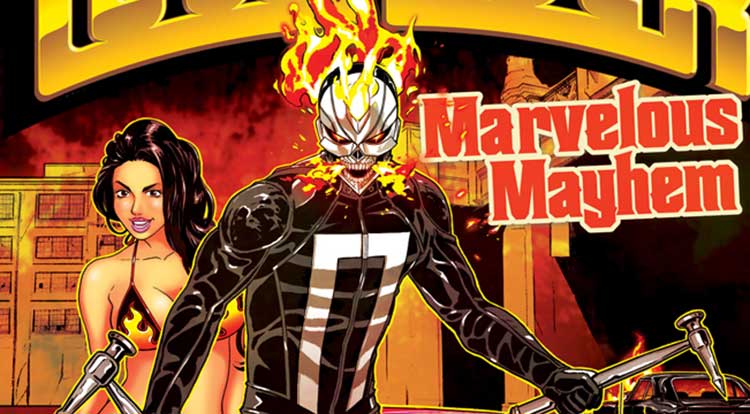 This spring, prepare for Marvel to break the mold again! Marvel Entertainment is partnering with LOWRIDER MAGAZINE in a unique cross-promotion that is sure to SHIFT fans into HIGH GEAR with the release of ALL-NEW GHOST RIDER.

In this promotion, Source Interlink Media’s (SIM) LOWRIDER MAGAZINE will feature the cover story of “Marvelous Mayhem” showcasing the newest character to take up the Ghost Rider mantle! Gorgeously rendered by writer/artist Felipe Smith, this cover features the newest Spirit of Vengeance posing with a stunning cover model and the meticulously-designed lowrider custom car of the month!

Jonathan Rheingold, Marvel’s V.P. Custom Solutions & Ad Sales, emphasizes how Robbie Reyes – Ghost Rider – is the perfect character to bridge both publishing outlets, “Robbie, the most recent host of the Spirit of Vengeance, Ghost Rider, represents the quintessential individual that would be a reader of Lowrider. When the Marvel editorial team was seeking a magazine partner to help promote the release of the ALL-NEW GHOST RIDER, LOWRIDER MAGAZINE was at the top of our list. This is a great illustration of life imitating art and art imitating life.”

Joe Ray, Editor of Lowrider Magazine echoes Rheingold’s comments, “The lowrider community is a largely Hispanic-dominated culture whose influence was born out of the Los Angeles lifestyle. With the new Ghost Rider being of Hispanic descent and out of East L.A., many of our readers and fans will instantly have a connection with him and want to explore a comic that echoes their own unique Los Angeles and auto-enthusiast lifestyle.”

In turn, during the month of April, Marvel Comics will feature full-page advertisements for LOWRIDER MAGAZINE across various titles in its comic book line. This initiative will also expand out into a series of high exposure press announcements, social media campaigns and much more across both Marvel & LOWRIDER MAGAZINE channels that is sure to engage comic book fans and auto-enthusiasts alike!

Retailers will want to BOOST their orders with the expected increase in auto-enthusiasts this unique promotion is sure to DRIVE into the stores.

Once again, the biggest creators bring you the biggest characters in the biggest stories…and it’s happening NOW! with ALL-NEW GHOST RIDER and LOWRIDER MAGAZINE.

ALL-NEW GHOST RIDER #1 drifts into stores this March! For more on Ghost Rider & All-New Marvel NOW!, please visit now.marvel.com and join in the conversation on Twitter with hashtag #MarvelNOW. About Lowrider Magazine
Lowrider Magazine is celebrating its 37th Year, and continues to be a dominant force in the automotive enthusiast industry across multiple platforms. Lowrider Magazine¹s mission is to provide unique editorial content that highlights the Lowrider culture in a positive light across print, web, and social media channels. Lowrider Magazine caters to the Hispanic-American community while engaging its audience by featuring the latest car builds and trends. Lowrider Magazine is a property of Source Interlink Media (www.sourceinterlinkmedia.com).
Visit www.lowridermagazine.com to learn more