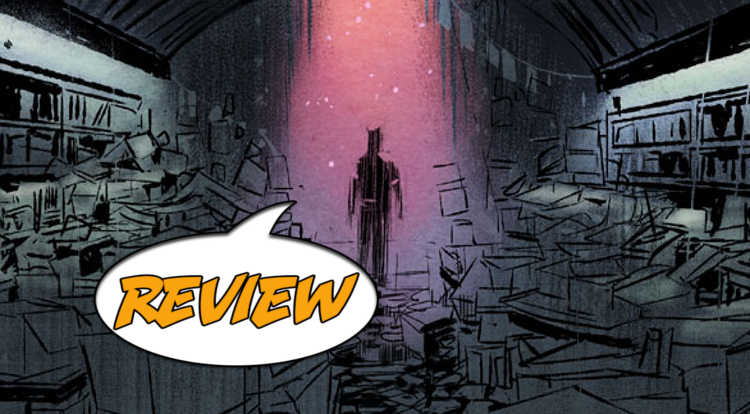 Time capsules are supposed to move forward in time, not backward, but when five friends discover a bunker with letters from their future selves they are wrenched asunder in the moment when they need to band together the most to prevent an apocalyptic future.

Grady, Billy, Daniel, Natasha and Heidi are a group of best friends. Best-y best friends. The kind that post-college rents a cabin in the woods and decides to bury a time capsule somewhere beneath a fir tree for themselves or future generations to stumble upon. The very last thing destined to be dropped into the capsule is a picture of the five together as friends. When digging in the woods Grady uncovers the titular bunker – straight out of Lost. This door has the added bonus of bearing the names of the friends painted across the door … all except for Billy that is. (I’m going to leave the more spoiler-y revelations on the page from here on out).

Like any good and foolish protagonists they open up the bunker to immediately discover letters from their future selves, you know, the scary now-we-live-in-a-post-apocalyptic-world-and-only-our-past-selves-can-change-it kind of letters. Through the letters their respective recipients’ tragic flaws come to bear. While these are overwhelmingly interesting it has the negative side effect of making Grady, Billy, Daniel, Natasha and Heidi all come across as bad people. They’re not hateful, but they’ve all done, and are about to do, things that we flatter ourselves we would think twice about.

That picture they took? The future version of that shows up with some decoration added. It’s pretty important.

Joshua Hale Fialkov nails each of the five characters with an individual voice and none of the aforementioned “tragic flaws” feels heedlessly tacked on. The letters are evoke a frightening world, although there is so much information stuffed into the four that The Bunker #1 is a bit confusing on its first read, Fialkov’s pacing is frenetic as his characters overreact (in particular Natasha), to the contents delivered from their future selves. I tend toward crediting Joshua Hale Fialkov with making this choice and assume that in coming issues The Bunker will truly find its feet. The idea is so strong that The Bunker #1 is not only worth reading, but worth climbing along for the ride.

COLOURING IS THE BEST

The Bunker #1 (and the entire story), was initially published as a black-and-white digitally. I’ve not read this original incarnation and I find that choice by Joe Infurnari (presumably made with Fialkov), fascinating because the colouring is the most dynamic part of the art. Not only does it shift from the events occurring in present day to the events unfolding in the future, as we’ve come to expect from wibbly-wobbly time travel stories, but it dulls and flares in association with the characters emotions. Natasha, for example, is quite fiery and she’s often coloured with pinks or when Billy discovers himself alone in the bunker it is all blue and grey.

Joe Infurnari’s art in The Bunker #1 is, by no means, weak – it just appears weak when held up next to the scope of tale Joshua Hale Fialkov is building. The photograph hinted at above is an important totem throughout the issue and was the single most well-executed drawing to hit the page.

The chance to redistribute The Bunker #1 by Oni Press and give it the colour it deserves has done nothing but enhance the overall storytelling experience.

This is not a perfect issue. It’s not even a perfect first issue, but there is something intangibly awesome about The Bunker #1. A great sci fi story with interesting characters told in a visually interesting way. Do yourself a favour and pick this issue up … if you can still find it on the shelf.