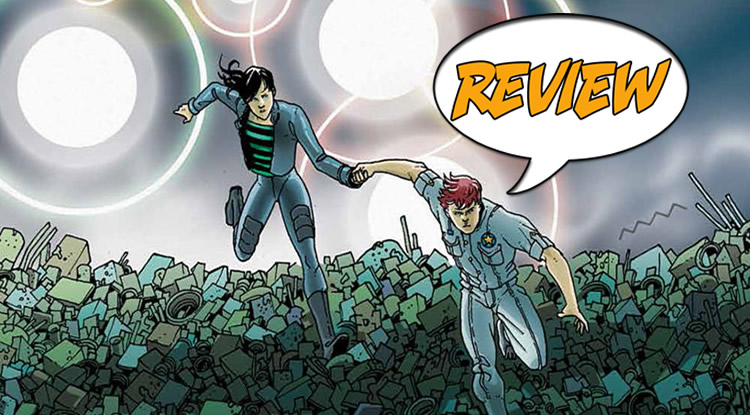 I often hear comics fans say that they’ve read every tale there is to tell. I take it upon myself to point out situations or storylines I haven’t seen in my time as a reader, and one of my very favorites is Great Pacific from Image Comics.

This title is both a science-fiction epic and a coming-of-age story, following the adventures of protagonist Chas Worthington as he claims the Great Pacific Garbage Patch, a region in the Pacific Ocean where plastic particulates and debris collect and accumulate, as a new sovereign nation, while also confronting his family legacy and the death of his oil-magnate father.

I have to say that seeing aliens in this book was something I didn’t expect, so I was happy to get this comic this week.

Previously in GREAT PACIFIC: “When a mysterious visitor washes up warning of UFOs and invaders from space, Chas Worthington finds his grip over New Texas threatened. But if the aliens are coming, Chas knows just the leader the earthlings need to represent them – himself!”

HOW ONE YOUNG MAN FINDS HIS WAY IN THE WORLD

The story is from Joe Harris, creator of such wonderful comics as Ghost Projekt, Spontaneous and The X-Files: Season 10. I never know just what Mr. Harris has in mind, so I truly enjoy his books!

I often have found myself wondering how I would handle having a huge legacy hanging over my head. Would I be able to live up to it? Or would I want to carve my own niche in the world? That’s basically what Chas is trying to sort out. He’s the heir to a huge energy conglomerate, but he’s not sure that’s what he wants to be when he grows up.

In this comic’s first issue, Chas set the stage for an amazing (and thought-provoking) exploration of the difference one man can make in the world. Knowing how Mr. Harris has dealt with fascinating tales in the past, I’ve enjoyed seeing what has been happening to Chas. We’ve seen many twists and turns in this book, and I continue to be gripped by the stories he’s telling.

One of Harris’ particular strengths has to do with creating characters who are clearly different from each other. His friend Alex is certainly another person with other motives and character traits than Chas, and that helps keep the story fresh and interesting. I also like Zoe, the French female who works with Chas.

Martin Morazzo, who has provided the art since the book began, gives it an interesting look.

The artwork, including the colors, grabs the reader from the first panel. It has a very unique feel, using a very different palate than most superhero books do, attracting my eye from page to page. I like that a lot!

Much like Mr. Harris’ ability to form people who act differently from each other, Morazzo visually accomplishes the same. That’s not always something I find in comics these days!

BOTTOM LINE: A Story Unlike Anything I’ve Read Before

Great Pacific is a comic about science and politics as much as it is about action and drama. It also shows just what a young adult can do when given the chance.

Harris and Morazzo keep going places I don’t at all expect, and that’s making me a big fan of this Image comic. I know I’ve said many times previously, but variety makes my reading experience more fulfilling, and Great Pacific is a book I’m glad I’m experiencing!

If you haven’t read Great Pacific before, be sure to pick up the trades so you can “get” what’s happening in this and future issues. It’s worth your time and money!